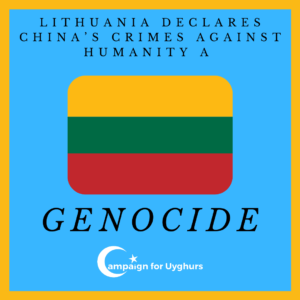 Today, the government of Lithuania passed a resolution declaring the situation in East Turkistan a genocide. China’s policies in the region that promote forced sterilization, involuntary internment, and religious persecution are a clear attempt to eradicate a people from their homeland. Now, Campaign For Uyghurs (CFU) is gratified to see that Lithuania is joining the ranks of nations standing against these crimes against humanity.

The declaration today is a result of the work of countless activists around the world. These early recognition bills are critical for building global momentum and solidarity toward holding the Chinese regime responsible for their crimes. We strongly encourage all nations to move quickly to pass similar designations, so that they will not reflect on this crisis as an instance when they were slow to action.

Executive Director of CFU Rushan Abbas said of the declaration that “Any day a government recognizes the genocide in an official capacity is a day of hope. Of course, the work we do must march on each day until the genocide is ended and those responsible are brought to justice, but moments like these are an excellent time to reflect on the progress we are making. We want to thank the government of Lithuania, and the activists there that made today possible. Together, we are building a better world.”

CFU knows the importance of building international solidarity, and has a strong desire to ensure international activists have the tools necessary to end this genocide. The work being done by Uyghur organizations and determined politicians around the globe is a constant effort that is deserving of recognition and praise.

Today’s suspension of the CAI deal is likewise indicative of a growing awareness that the Chinese regime’s actions are a danger not only to those people they are actively seeking to exterminate, but to the world.

More nations will join the fight in the coming months. There is a movement building that will be too large to be controlled by false media narratives, slander of survivors, and suppression of cultural voices. The recent rise in propaganda being spread by the CCP is proof that this movement is feared by the regime. Today is a victory, and there will be more like it until the genocide against the Uyghurs is stopped. Congratulations to Lithuania, and from Uyghurs all over the world, thank you.