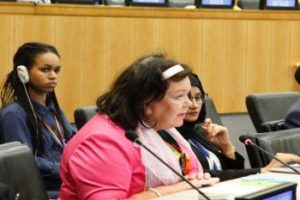 I have the honour to read this statement on Xinjiang on behalf of a group 23 countries including:

We share the concerns raised by the Committee for the Elimination of Racial Discrimination in their August 2018 Concluding Observations on China regarding credible reports of mass detention; efforts to restrict cultural and religious practices; mass surveillance disproportionately targeting ethnic Uighurs; and other human rights violations and abuses in the Xinjiang Uighur Autonomous Region.

We call on the Chinese government to uphold its national laws and international obligations and commitments to respect human rights, including freedom of religion or belief, in Xinjiang and across China. The Chinese government should urgently implement CERD’s eight recommendations related to Xinjiang, including by refraining from the arbitrary detention of Uighurs and members of other Muslim communities. In view of these concerns, we call on all countries to respect the principle of non-refoulement.

Furthermore, we call on the Chinese government to allow the Office of the United Nations High Commissioner for Human Rights and UN Special Procedures immediate unfettered, meaningful access to Xinjiang.

Mr. Chair, I’ll close with a question: What measures should the Chinese government undertake to address the concerns raised in CERD’s Concluding Observations regarding restrictions on the right to freedom of religion or belief and the right to freely participate in cultural life?