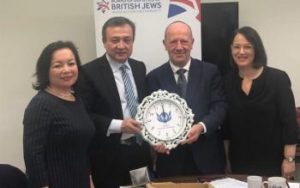 Jewish leaders urged the community to “stand up” on Monday as they heard from an exiled activist seeking to raise attention to the plight of an estimated 1 million Chinese Muslims thought to have been detained in China’s Xinjiang region.

World Uyghur Congress president Isa Dolkun met a dozen Jewish leaders, including from synagogue movements, the human rights group Rene Cassin and the Orthodox youth movement Bnei Akiva in an event in North London hosted by the Board of Deputies.

READ THE FULL REPOST AT TIMES OF ISRAEL