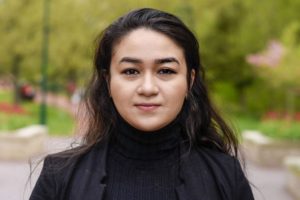 he academic and activist Ilham Tohti had fought for twenty years for Uyghur rights and to enhance a dialogue between the Uyghur and the Han Chinese, before he was sentenced to lifetime imprisonment for ’separatism in 2014. PEN/Opp has interviewed his daughter Jewher Ilham who was with him when he was arrested at Beijing Airport. Today she does not know whether her father is alive or not.

The twenty-five-year-old Jewher Ilham has not seen her father Ilham Tohti, economist and human rights activist, since 2013. She isnot sure ifhe is alive, but she remembers them eating ramen together at the airport in Beijing just before the plane was due to leave. She was going with him to the United States becausehe had been offered a research position at the University of Indiana.

“We left home in the middle of the night to make sure that the police would not pursue us. Dad was stopped at the airport. I didn’t want to go without him and protested. He literally pushed me awayand told me to leave. I couldn’t stop crying, I wanted to stay with my family,” says Jewher Ilham on the phone from Washington DC.

When Ilham Tohti was arrested in February 2013 he did not know that his arrest was part of a bigger operation. He was one of the most popular lecturers at the Minzu University in Beijing, a university that caters for ethnic minorities, and had worked to strengthen the position of the Uyghur people, an ethnic Muslim minority in China’s western region Xinjiang, where they numberis approximately forty-five percent of the population.

He worked to promote the integration of Uyghurs in China by demanding that they be allowed to use their own language and should be given a greater regional autonomy. Ilham Tohti also criticised repressive state measures.

In the autumn of 2019, the European Parliament awarded Ilham Tohti the Sacharov Prize. Similar to other recipients of this prize Tohti is a human rights activist who has been imprisoned for his work for human rights. According to the motivation, Tohti was awarded the prize withthe hope that the mutual understanding betweenthe Uyghurs and the Han majority in China would improve.

At the time of his arrest Tohti was a leading Uyghur intellectual, well-known mainly for the platform Uyghurbiz that he initiated, a platform where the Uyghurs are encouraged to communicate in Chinese, hereby creating a unique meeting place for the two ethnic groups living apart but within the same country.

“My father created his own site on an American server so that people could share information and challenge their own world-views. Although the Chinese regime several times tried to shut down the site, it symbolizes my father’s contribution to the freedom of expression—like a safe haven for his thinking,” she says and continues, “In China, where social networking such as Twitter and Facebook are forbidden, Ilham Tohti wanted to contribute by giving Chinese citizens a tool to connect to the world.”

The Uyghurs minority have in recent years suffered severe repression by the Chinese regime due to their ethnic identity and religion. Since April 2017 more than one million Uyghurs have been indiscriminately imprisoned in detention camps, so-called re-education camps, where they are forced to give up their ethnic identity and religion, required to swear allegiance to the Chinese regime.

The tiny interrogation room and passport control office at the airport in Beijing, where Jewher Ilham last saw her father, split her world in two. She remembers the border as a strict line between her new life in the United States and the old life that she left behind. At first it was not really obvious that she should travel to the US alone. She only knew a few words in English, she says. And upon her arrival to the States the border police tried to send her back to China. She crossed her hands in an attempt to communicate that her father had been arrested just before she boarded the plane.

She was on her own. In her jacket pocket she had a business card from the academic Elliot Sperling, a good friend of her father Ilham Tohti. At his death in 2017, Sperling was one of the world’s leading historians with a focus on Tibet and China. He helped her stay in the country—exactly how this happened she is reluctant to talk about for security reasons, she says. After one and a half years in the US she applied to a University programme and last summer she graduated with a degree in Political Science, Near Eastern Studies and Central Eurasian studies.

Jewher Ilham was earlier reluctant to make any claims about the dire situation of the Uyghur people, but now she uses all available means to rouse people concerning the suppression of the Uyghurs. The turning point came a few years ago when the news of the detention camps was spread, and Jewher realised that her father’s arrest neither had anything to do with her backgroundor her knowledge.

“I decided that I was free to say what I wanted about my father’s situation. I did not grow up in the Uyghur region, but in Beijing. Despite my background, I am my father’s daughter and would be able to continue his battle, but I didn’t think that I was a good representative of the Uyghur.”

She realised that since she was raised in Beijing she did not have the right to represent other Uyghurs—that her knowledge was not enough. This duality both affects her activism and strengthens it, she says. But the struggle has a high price. “I felt I did not have the right. I was afraid that my activism could have negative consequences for my family. They are still in China and risk being subjected to retaliation by the regime. I am worried for my family,” says Jewher Ilham.

As from 2014 Ilham Tohti is imprisoned for life, accused of spreading separatist ideas and encouraging violent activities aimed to disrupt the Chinese regime. At the trial in 2014 the prosecutor claimed that Tohti, via his web platform, had been propagating for separatism, including the promotion of an independent Xinjiang. “Instead its aim was to spread knowledge about social issues both among the Uyghurs and the Han Chinese,” says Jewher Ilham.

“The accusations of extremism were rather ironic since my father is perhaps one of the few Uyghurs who has never had any intention of disrupting the country. He critiqued the politics of the Chinese government, but he was never a separatist. China is trying to discredit him. And Chinese citizens will not be asking for evidence. The accusations are so gross that everyone hates him without even wondering why he has been imprisoned. They absolve themselves by making him an enemy of the state’s internal affairs,” Jewher Ilham says emphatically.

She describes her father as a moderate voice among the Uyghur. He tried to build understanding between the Han Chinese and the Uyghur so that Uyghurs could keep their culture and their language. “He wanted the languages to be vital—both languages. He wanted us to speak Chinese but without losing our own language. Now they are burning the Koran and schools are being closed. Our books cannot be published. Why? My father tried to stop the developments that we are experiencing now.”

Jewher Ilham has no news of her father’s whereabouts as from 2017. “I demand that the government restore my family’s right to visit him; we want to know whether he is still alive and, if so, how he is faring.” She adds that since she is a very positive kind of person, she is optimistic about the situation. “I am trying to cling to the hope I had when he was arrested six years ago. Each day I hope that he will be released.”

However, her concern for her family who are still in China keeps her awake at night. “I am worried for my family, but I have realised that I must contribute to the understanding of the Uyghur people’s situation, no matter which country I come from and no matter what background I have. The international community must continue to pressure China.”

She did not plan on staying in the United States. Jewher Ilham is now twenty-five and has taken time off from her studies in the US to work full-time with issue of the Uyghurs human rights. Next year she wants to study international relations.

In the US her life as a young woman has become significantly different. “I can do my own thinking and do not need to repeat the ‘truths’ of the government; I do not need to sound like a textbook. I am not bound to a given answer and have found that there can be many answers. Not only for me, but for everyone. I have learnt to embrace other people’s opinions. In China people think you are mad if you don’t sound like a textbook.”

But the route to independent thinking has not been straight forward; she has been subjected to hate campaigns on the Internet and has been threatened several times due to her active stance against the suppression of the Uyghur. “I have been called a whore by people who know nothing about my father. It is not even propaganda, it is pure hatred,” explains Jewher.

A recent leak of secret documents from China, 137 pages comprising lists of three thousand people’s life habits, reveals how people dress and whether they pray—all meticulously documented. The lists contain information about what people are accused of and why they might be sent off to a detention camp or a re-education centre.

“The information in this leak made me shudder because it backs the Uyghurs’ testimonies. However, we already had this information, so I am not surprised at all. Uyghur families have personally experienced exactly what the leaked documents show,” she says.

Moreover, the leak reveals that Uyghurs are arrested and interned on much weaker grounds than what China claims. China insists that the only reason behind the internments of Uyghurs is to combat Muslim terrorism. In the document there is also information about people’s contacts and their family members.

There are international and human rights aspects to Ilham Tohti’s case, such as how moderate Muslim values might be fostered in an environment of state-controlled religious oppression, and issues such as what is being done to open up a dialogue between a Muslim minority and a non-Muslim majority, and in what ways an authoritarian state might relate to dissidents.

Internationally the reactions to the detention camps for Uyghurs in China has led to outrage; China is harshly criticised for its treatment of the Muslim Uyghur people.

Jewher Ilham feels that she lacks strategies for her activism. Social media are to her a vital daily component and she appreciates their importance as news channels. Therefore, she says, in this coming year she has decided to focus on the topic of the spreading of the coronavirus. The virus must be seen in the light of China’s suppression of the Uyghurs, and within the context of the region where the detention camps are. “More than a million people are interned in these camps. When one person contracts the disease, it can spread rapidly, within the course of a few days.”

This was not an obvious line of action for her at first. Now the struggle against China’s oppression of the Uyghur minority has become a necessary part of her life. “I don’t find it a burden. The struggle for the Uyghur should be just as natural as drinking water. We are all human beings and need to take care of one another,” claims Jewher Ilham.

Her incentive is also enhanced by the fact that people in China have lost their confidence in the regime. “If a peaceful voice like my father’s can be silenced, what space remains for others? If the government cannot tolerate even my father’s critique, what remains?” Jewher Ilham asks rhetorically.