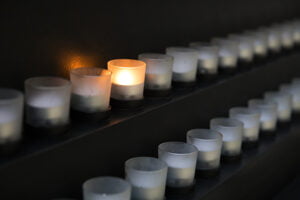 Today marks International Holocaust Remembrance Day. This date was selected on the anniversary of the liberation of Auschwitz-Birkenau, and directives for establishing the are to honor the millions of victims of the Nazi regime, as well as to develop educational programs to prevent future genocides.

Campaign For Uyghurs (CFU) solemnly remembers the lives brutally taken by evil ideology that would devalue human life. The vow of “Never Again” must be upheld, and today we thank the many people in the Jewish community and beyond who have committed to educating, honoring, and preventing future atrocities. The legacy of millions of innocent people brutally murdered demands a remembrance for future generations.

As our world is facing the genocide of Uyghurs, the lessons of the past instruct our present on how to confront a regime that uses its power to justify the taking of innocent life. As the world profits off of Uyghur slavery which the Chinese Communist Party presents as “poverty alleviation” which will “liberate” the Uyghurs, the regime exploits Uyghur dancing in propaganda videos on twitter, while denying Uyghurs human dignity and the right to live. As the Chinese regime has openly stated its intentions to replicate many aspects of Nazi Germany’s quest for power, we must confront it.

Former Chinese minister of defense Chi Haotian gave a speech in 2005 stating that “Hitler’s Germany had once bragged that the German race was the most superior race on Earth, but the fact is, our nation is far superior to the Germans.” The Chinese regime has studied history’s mistakes to prevent replicating the “mistakes” that led Nazi Germany to lose.

Elie Weisel, as he accepted the Nobel Peace Prize, uttered his famous quote “I swore never to be silent whenever and wherever human beings endure suffering and humiliation. We must always take sides. Neutrality helps the oppressor, never the victim. Silence encourages the tormentor, never the tormented. Sometimes we must interfere. When human lives are endangered, when human dignity is in jeopardy, national borders and sensitivities become irrelevant. Wherever men or women are persecuted because of their race, religion, or political views, that place must—at that moment—become the center of the universe.”

This quote is incredibly relevant today. The actions we take to confront the evil carried out by the Chinese regime have great implications for the future. We must have the moral courage to pass this present moral test, and to stand boldly for the future of humanity. The bonds of oppression must be broken before they further ensnare the world that our children will inherit.