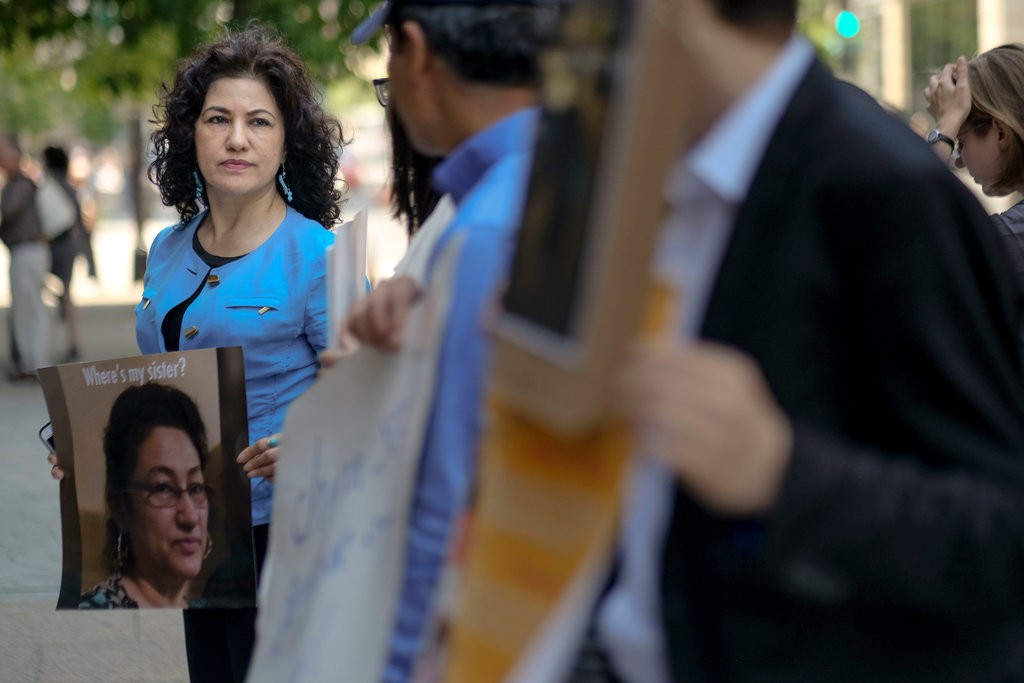 “I strongly believe that the human rights abuses the Chinese government is doing against the Uighurs should be part of the trade talks,” said Rushan Abbas, whose sister and aunt were detained in China’s Xinjiang region last year.

WASHINGTON — The United States and China are racing to clinch a historic economic treaty as early as next week that could drastically reshape relations between the world’s two largest economies. But as negotiations reach their final stages, the sensitive subject of human rights has been left conspicuously off the table.

China has faced growing condemnation from human rights groups in recent months for its detention of up to one million ethnic Uighurs and other minority Muslims in large internment camps in the country’s northwest region of Xinjiang.

But the Trump administration has studiously avoided rattling China by not raising the topic during the trade talks, viewing it as an impediment to securing what President Trump has said could be “the biggest deal ever made.”

Administration officials have declined to use any of the economic leverage the White House amassed through tariffs placed on $250 billion worth of Chinese goods to compel China to change its policies toward Uighurs. It has also backed away from imposing economic sanctions on Chinese officials believed to be involved in the repression of Muslims in the northwest.

In the fall, the United States was on the verge of imposing sanctions on top Chinese individuals and companies but pulled back after some administration officials said doing so would jeopardize trade talks with Beijing, according to three American officials.

Outrage over China’s repressive practices has grown among officials not working on trade. On Friday, Randall G. Schriver, the assistant secretary of defense for Indo-Pacific security affairs, said at a news conference that the Pentagon had significant concerns about the “mass imprisonment of Chinese Muslims in concentration camps,” which he said could have up to three million people.

The discussion on sanctions had gone through the interagency process, and officials at the State Department and at the National Security Council had voiced their support for the action. The sanctions languished at the Treasury Department, however, as some senior administration officials believed that they should shelve them during the trade talks. The sanctions would have been imposed under the Global Magnitsky Act, which allows the executive branch to use economic and travel penalties to punish foreign officials for human rights violations.

A Treasury spokesman said that the department does not telegraph sanctions or comment on prospective actions.

In November, Cui Tiankai, China’s ambassador to the United States, warned in an interview with Reuters that Beijing would retaliate “in proportion” if Washington went ahead with sanctions over human rights abuses. He said Beijing’s policy was to “re-educate” a group it considers terrorists.

After Mr. Trump and President Xi Jinping of China talked over a steak dinner in December at a Group of 20 meeting in Argentina, the administration decided to shelve the proposed sanctions, according to the American officials. The two leaders had set a deadline of March 1 to reach a broad trade agreement, and American officials decided the sanctions could wait until after that deadline. But trade negotiators failed to reach a deal by that date, and talks are still continuing.

China has cracked down on ethnic minorities like the Uighurs, a Turkic-speaking group of mostly Sunni Muslims, who form the largest ethnic group in Xinjiang. For decades, many Uighurs have resented Communist Party rule, saying Chinese officials suppress their culture and religion and practice widespread discrimination.

Officials in Beijing say they fear terrorist ideas have taken root among the Uighurs and point to outbursts of violence in recent years, particularly a deadly riot in the capital of Xinjiang in 2009. A vast internment program began soon after, largely under the orders of Chen Quanguo, who became party chief of Xinjiang in August 2016, after a stint in the Tibet Autonomous Region.

Of the majority-Muslim nations, only Turkey has strongly denounced the recent mass detentions and surveillance in Xinjiang, though Ankara maintains strong economic ties to Beijing.

As a last-ditch effort, activists are now pushing American officials to insert the humanitarian crisis in Xinjiang into the trade talks, which may wrap up next week in Washington, or to impose sanctions to pressure China to end persecution in the region.

On Friday, a group of about a dozen demonstrators, many of whom are Uighurs living in the United States, gathered in Washington outside of a conference focused on sanctions policy to pressure Treasury Department officials to take action against Chinese officials involved in the Xinjiang abuses under the Global Magnitsky Act.

“I strongly believe that the human rights abuses the Chinese government is doing against the Uighurs should be part of the trade talks,” said Rushan Abbas, an organizer of the demonstration whose sister and aunt were detained in Xinjiang in September. “They are facing indoctrination, brainwashing and elimination of their values as Muslims.”

The Trump administration has been focused on leveling the economic playing field with China, using tariffs to pressure Beijing to lower its trade barriers and to give American companies more access to its market. Touchy subjects like human rights have been placed on the back burner in hopes of striking a deal that would benefit the United States economy. 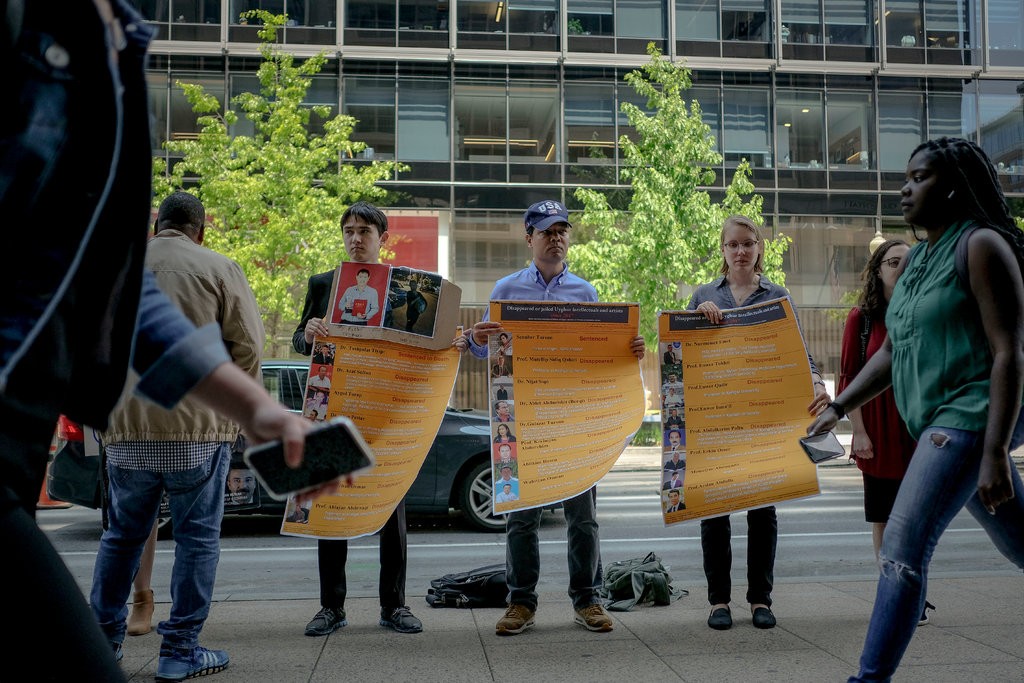 Ms. Richardson said that the two topics are linked and that the American government should impose restrictions on American companies doing business with Chinese firms known to be supporting detention centers, or providing technology used in the vast electronic surveillance system that has become commonplace across Xinjiang, which is one-sixth of China’s territory.

“There’s room for scrutiny of Chinese companies that are engaged in one way or another in repression in Xinjiang,” she said. “Markets around the world need to take a hard look.”

Cracking down on those involved in or enabling the repression of ethnic Uighurs is an issue that enjoys rare bipartisan support. Since 2018, Democratic and Republican members of Congress have pushed the White House and agencies to impose sanctions and limit trade with Chinese companies involved in Xinjiang.

In March, the House Foreign Affairs Committee sent a similar letter to Mr. Pompeo that also highlighted new information on American businesspeople doing work in Xinjiang. The most notable was Erik Prince, the wealthy supporter of Mr. Trump whose Hong Kong-listed company, Frontier Services Group, has significant Chinese investment and is building a security training center in Xinjiang. Mr. Prince is the brother of Betsy DeVos, Mr. Trump’s education secretary.

Legislators have introduced bills in the House and Senate that, if passed into law, would compel the Trump administration to impose sanctions and scrutinize commerce related to Xinjiang. Committee members are reviewing the bills and could move them out to the wider bodies this month or next.

Failure to address the situation in Xinjiang in a historic formal trade deal between the two countries could prompt vocal criticism from both Democrats and Republicans.

“Words alone are not enough,” Senator Marco Rubio, Republican of Florida, said in a statement. “It is time for the Trump administration to impose targeted sanctions against Chinese officials, including Chen Quanguo, who are involved in the government’s repressive policies.”

Speaker Nancy Pelosi, Democrat of California and a longtime critic of China’s human rights record, urged the Trump administration to include the treatment of the Uighurs in the trade negotiations.

“The administration must demonstrate the moral courage to use its economic leverage to not only guarantee fair trade for American products in Chinese markets, but also to advance human rights in China,” Ms. Pelosi said in a statement.

Through the trade negotiations, the United States is trying to force China to curb subsidies of its state-controlled enterprises, to respect American intellectual property when engaging in joint ventures, to ease nontariff barriers to international commerce and to ramp up purchases of American products, like soybeans and liquid natural gas.

From the American perspective, many of these economic issues are linked to national security, but the United States has steered clear of the third-rail matter of human rights.

“For China, mixing human rights in the trade talks is unthinkable,” said Michael Pillsbury, a China scholar at the Hudson Institute who advises the Trump administration. “There were supposed to be four dialogue mechanisms that were set up after the first summit between Mr. Trump and Mr. Xi at Mar-a-Lago, and the Chinese adroitly maneuvered to make sure human rights were not part of the dialogues.”

Mr. Pillsbury notes that in the 1990s, trade and human rights were more closely intertwined. In 1993, Ms. Pelosi led efforts to make China meet human rights conditions in exchange for trade benefits. However, after intense lobbying by Chinese officials, and the threat of lost sales of American products such as Boeing aircraft, the Clinton administration began to back off its concerns about the treatment of Chinese dissidents.

Since then, as China has become an even more integral part of the global commerce system, the issues of trade and human rights have been increasingly compartmentalized. While Mr. Pompeo has been critical of China over the re-education camps in Xinjiang, which he said this week were “reminiscent of the 1930s,” Mr. Trump has been silent on the matter.

“The U.S. is really missing the opportunity to be a leader, to take a minimum symbolic action against a country that is incarcerating millions of people for ethnic reprogramming,” said James A. Millward, a professor at Georgetown University and an expert on the Xinjiang region.

For Uighurs living in the United States, protesting comes with risks as their outspokenness can lead to harsh retribution for their relatives in China.

Tahir Imin was studying abroad in 2017 when the crackdown reached his family after he spoke out about the conditions in Xinjiang. Since then, his brother and mother have been imprisoned and his family business has been confiscated. On Friday, Mr. Imin, 38, held a sign criticizing the Chinese government and pleaded with the United States government to help.