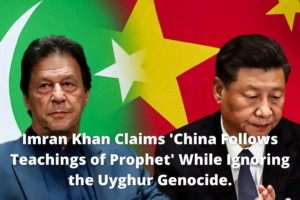 Pakistan PM Imran Khan on Sunday praised China claiming that the Chinese regime elevated 70 crores, meaning seven hundred million, people from poverty after following the teachings of the Prophet Muhammad (pbuh). However, he ignores the CCP’s mass imprisonment and genocide of Uyghur Muslims. Khan said “China in the last 30 years elevated 70 crores people from poverty, they are following the teachings of Prophet. We should remember that our Prophet came as divine mercy for humanity all over the world. Anyone who walks on Allah’s path, there would be prosperity.”

It was despicable enough when Khan invited the Chinese Foreign Affairs Minister Wang Yi as a guest to the Organization of Islamic Cooperation (OIC). Even they had remained silent on China’s mass imprisonment of Uyghur Muslims. The Uyghur genocide has in many ways been likened to the Holocaust and the world’s inaction to the genocide against the Jewish people. It is not just disappointing, but a stab in the back to invite the murderer of your fellow brothers and sisters in faith to the largest gathering of Muslim leaders in the world.

Like many other Muslim leaders, there is no doubt that Imran Khan has been bought by China. It is reported that Imran Khan has applied for a Chinese loan to repay existing loans. Pakistan had previously borrowed 15 billion Chinese yuan about three years ago. The loan was made to Pakistan as part of a bilateral agreement by a consortium of Chinese banks, including the China Development Bank, the Bank of China and the Industrial and Commercial Bank of China. China has provided loans to Pakistan for major projects, including the China-Pakistan Economic Corridor. China uses this tactic to trap nations like Pakistan in high interest loans to bend to China’s demands.

At a time where the Chinese regime is waging a war against Islam, where the Noble Quran, the Hijab, the beard, praying, and fasting is banned. Where mosques are destroyed and religious figures are locked up and murdered along with millions of Uyghur Muslims in concentration camps, all while calling Islam and religiosity mental diseases. Uyghurs can no longer identify as a Muslim, fearing if they did, they would most certainly be persecuted for it. To claim that the most Islamophobic government on Earth is on the path of the Prophet Muhammad (pbuh) is heretical and blasphemous to say the least.

I urge the Muslim-majority states, its leaders, Muslim organizations and my fellow Muslims to stand with Uyghurs by calling out the Uyghur Genocide that is taking place right in front of our eyes and to defend your fellow brothers and sisters in faith against misleading voices like Imran Khan because it is the duty upon every Muslim to do so.