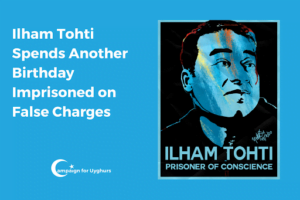 Today marks yet another birthday behind bars for Professor Ilham Tohti, who turns 52 today. Campaign For Uyghurs (CFU) calls on the international community to renew demands for justice for Professor Tohti, himself an inspiring advocate for greater dialogue between Han Chinese and Uyghurs.

As Beijing is slated to host the 2022 Winter Olympics in spite of the international outcry, it is preposterous that China would be treated as an equal in the international community while continuing to jail Professor Tohti and deny him basic rights. He has not been allowed to see his family for years, and the very notion that someone who peacefully advocated for greater understanding between two ethnic groups would be targeted in this manner. His imprisonment is a clear indication of the true genocidal intent of the Chinese regime as they have first attacked Uyghur intellectuals and societal leaders.

CFU Executive Director Rushan Abbas stated, “The case of Professor Ilham Tohti, and the bravery of his daughter, Jewher Ilham, in continuing to raise his case, should be a litmus test for the Chinese regime. As is the case for millions of Uyghurs who are detained, tortured, and killed without cause, we must make clear that there can be no cooperation while the Chinese authorities continue to engage in criminal behavior and to carry out active genocide. While they continue to perpetuate the sham that China has the rule of law, it is clear that this is not the case.”

In a social media post marking her father’s birthday, Jewher Ilham wrote “Would he have chosen the same path of human rights advocacy if he knew what he was going to face? Yes, I know he would do the same over again and again! He would never stop peacefully fighting for our people, the Uyghurs!”

While justice is denied to Ilham Tohti, and while the genocide of the Uyghurs is ongoing, CFU will continue to spotlight the crimes of the Chinese regime, and to demand that the international community recognize it as the global threat that it is.

To contribute to our work to advocate for the human rights and democratic freedoms of Uyghurs and other Turkic peoples, and to end Uyghur genocide, please donate here.