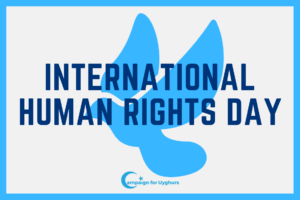 Today is International Human Rights Day. This day of recognition comes as seven countries have announced a diplomatic boycottof the Beijing 2022 Olympics, and the Uyghur Tribunal delivered a determination that China is committing a genocide against the Uyghur people.

The United States announced sanctions against SenseTime, a Chinese A.I. company, for its role in human rights abuses, as well as against two of the primary architects of the Uyghur genocide, Shohrat Zakir and Erken Tuniyaz today. While these are steps towards protecting Uyghurs from forced labor and a sign of solidarity against the Communist Chinese Party’s regime, it is not enough. Sanctions must be more widely applied, particularly in light of the additional evidence provided through leaked documents that demonstrate Xi Jinping’s direct hand in genocide.

In addition to these sanctions, the diplomatic boycotts of the Beijing 2022 Olympics and the genocide determination from the Tribunal, the United States House of Representatives passed the Uyghur Forced Labor Prevention Act and a resolution recognizing and condemning the Uyghur genocide.

At a rally organized on International Human Rights Day, Campaign for Uyghurs (CFU) staff stated “We must reiterate to the world: China has failed to be a country ruled by law, or that acknowledges human rights. The worldview of its leaders is so fundamentally different from the rest of the world, that taking innocent civilians hostage is a normal behavior openly defended.”

CFU Executive Director Rushan Abbas said “Each year on this day the world pauses to review its past, and address its future. We look back on issues of human rights when justice triumphed with pride, and those where it did not with regret. It is of utmost importance that we remember this: the only way to honor our past errors is to learn from them at present. I do not want the Uyghur genocide to be another regret the world looks back on. The sanctions enacted by the Treasury today against Shohrat Zakir, Erken Tuniyaz and SenseTime A.I. is another step towards restoring justice and human rights by punishing those complicit in genocide. It is a welcome move that carries the weight of symbolism of today.”

For those seeking to celebrate this day with meaningful action, consider joining CFU in demanding universal rights for Uyghur people. The Berlin Beijing Olympic Boycott campaign continues to gain traction, but requires widespread grassroots action to create international solidarity. It is only with the voices of millions that we can protect the lives of an entire people group.