For Ziba Murat, waiting for word of what became of her ailing mother after she abruptly disappeared in the Muslim-majority Xinjiang region of northwestern China following a fractured phone conversation more than two years ago is a type of torturous pain that doesn’t get easier despite the passage of time.

“We have no information on where she is, why she is being detained, how she is doing. Everyone is scared to even say her name – they can only refer to her as ‘she’ or ‘your daughter’s grandma’ – everyone is scared,” Murat, who now works as a business analyst in Virginia and first came to the United States to study in 2005, told Fox News.

Murat said she had a peaceful childhood in Urumqi – the capital city of Xinjiang – and it wasn’t until after she left that the Chinese government’s acts of repression started to choke the minority-populated pocket of northwestern China.

Swaths of her people began to disappear, but the targeting of her then 56-year-old mother – a medical doctor who had recently retired due to underlying health woes – has left Murat both pained and confused. 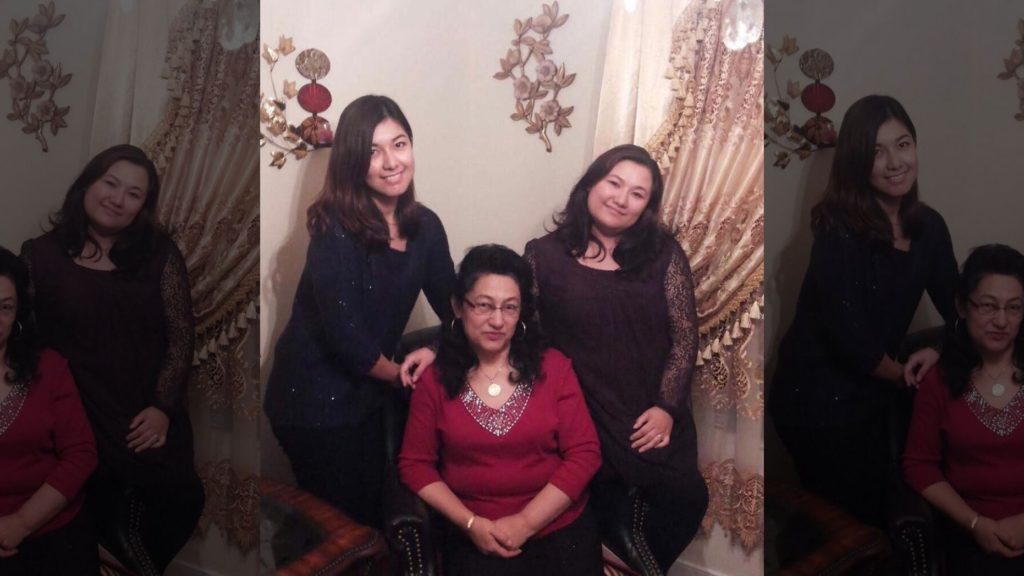 Happier times: Murat (right) and her sister Zamira (left) with their mother Dr. Gulshan Abbas, before she “disappeared” in the Muslim-majority Xinjiang region of China in 2018. (Ziba Murat)

“She is a gentle woman, has always been non-political and compassionate. She became a doctor as a way to help other people, something she saw as an obligation, not a choice. She didn’t travel to any Muslim-majority countries, all she did was talk (to her daughters) in the U.S.,” Murat said. “It has been two years, and we don’t even know if she is alive. That people like her can be targeted shows how cruel this government can be.”

Murat’s appeals to the Chinese Embassy in Washington, she noted, have languished without response.

Yet this story is one of many when it comes to the missing in this far-flung pocket of the world; it represents a small slice of a burgeoning file of alleged human rights abuses.

In a new Heritage Foundation report entitled “Why the U.S. Should Issue an Atrocity Determination for Uighurs,” a potent case is made for the U.S. government to issue an atrocity declaration on the Chinese government’s treatment of Uighurs.

“An atrocity determination would reflect the realities of what the Uighur community in China is facing, highlight the growing severity of the human rights violations they face, and galvanize much-needed focus and attention on a situation that may amount to some of the worst human rights violations committed in the 21st century,” Olivia Enos, a senior policy analyst in the Asian Studies Center, at The Heritage Foundation, told Fox News. 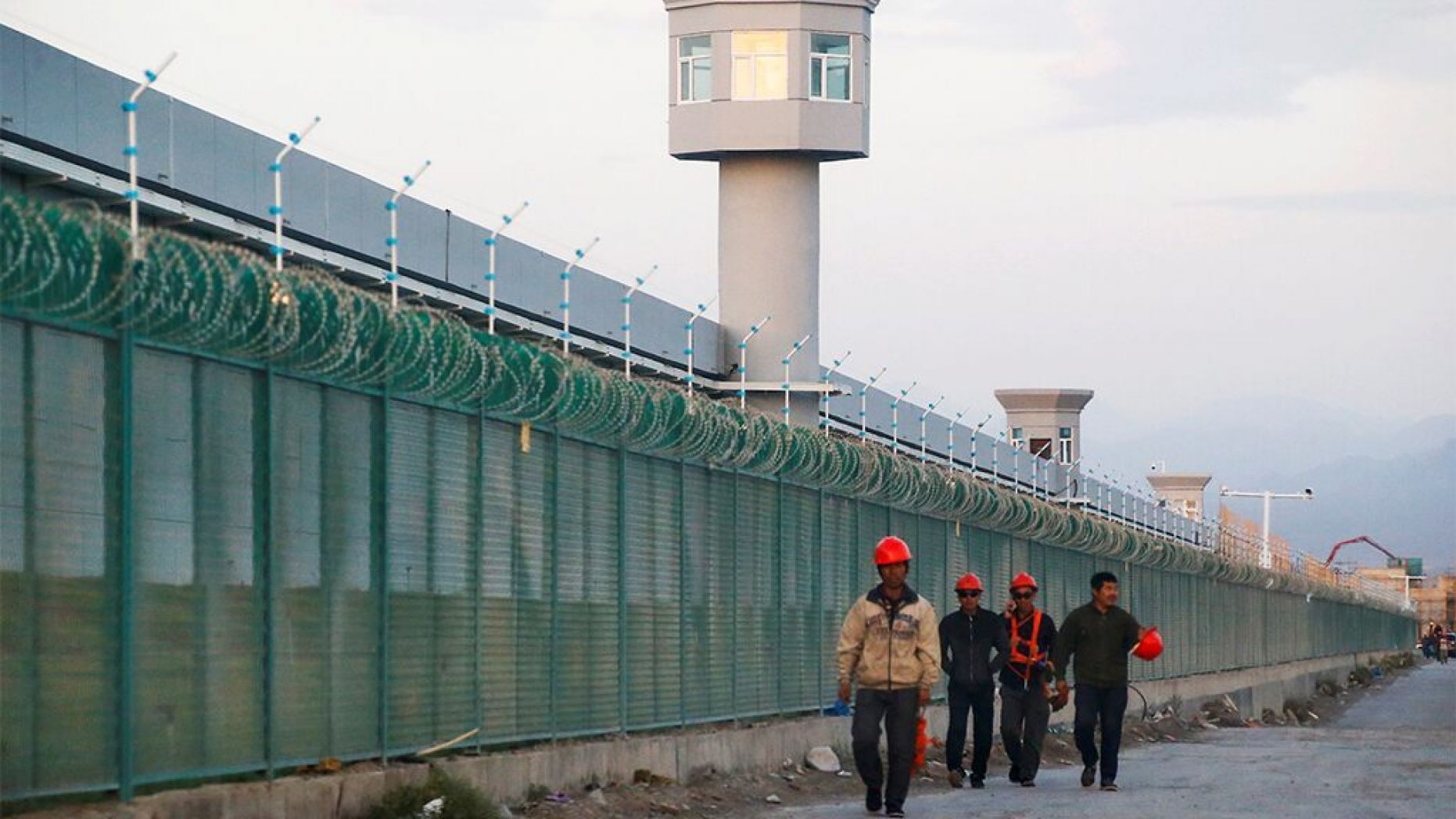 FILE PHOTO: Workers walk by the perimeter fence of what is officially known as a vocational skills education centre in Dabancheng in Xinjiang Uighur Autonomous Region, China September 4, 2018. This centre, situated between regional capital Urumqi and tourist spot Turpan, is among the largest known ones, and was still undergoing extensive construction and expansion at the time the photo was taken. Picture taken September 4, 2018. REUTERS/Thomas Peter/File Photo – RC112C876810

Since 2017, up to three million Uighur Muslims in China’s western Xinjiang province have been plucked from their homes by authorities and disappeared into a prison camp, which the Chinese government glosses over with the term “re-education” facility.

But as evidence unravels of mass human rights violations, the Trump administration is said to be contemplating labeling the Chinese Communist Party (CCP)’s oppression of the Uighur minority genocide, as evidence continues to mount that the government is engaged in a campaign of systematic slaughter against them.

“Killings, subjection to conditions that would kill, forced transfer of children, along with crimes against humanity,” The Heritage Foundation’s report notes.

The U.S. defines genocide as taking actions “whether in time of peace or in time of war and with the specific intent to destroy, in whole or in substantial part, a national, ethnic, racial or religious group as such.”

Only one of the elements needs to be met for it to be considered genocide, but it seems that the situation Uighurs face may meet more than one of the conditions, the report underscores.

Of increasing concern is the notion that the Uighurs are being subjected to brutal and coercive family planning policies – including forced sterilizations and implantation of intra-uterine devices (IUDs) in Uighur women and forced abortions of Uighur babies – indicating the CCP’s intent of significantly reducing, if not eliminating, the Uighur population.

“Uighur mothers (are) subjected to forced late-term abortions – and even infanticide – for failure to comply with the CCP’s arbitrary birth-spacing requirements,” the report surmised. “According to Chinese government documents, the CCP has the intent of subjecting at least 80 percent of Uighur women of child-bearing age in four southern rural prefectures in Xinjiang to either forced sterilizations or mandatory IUD placement.” 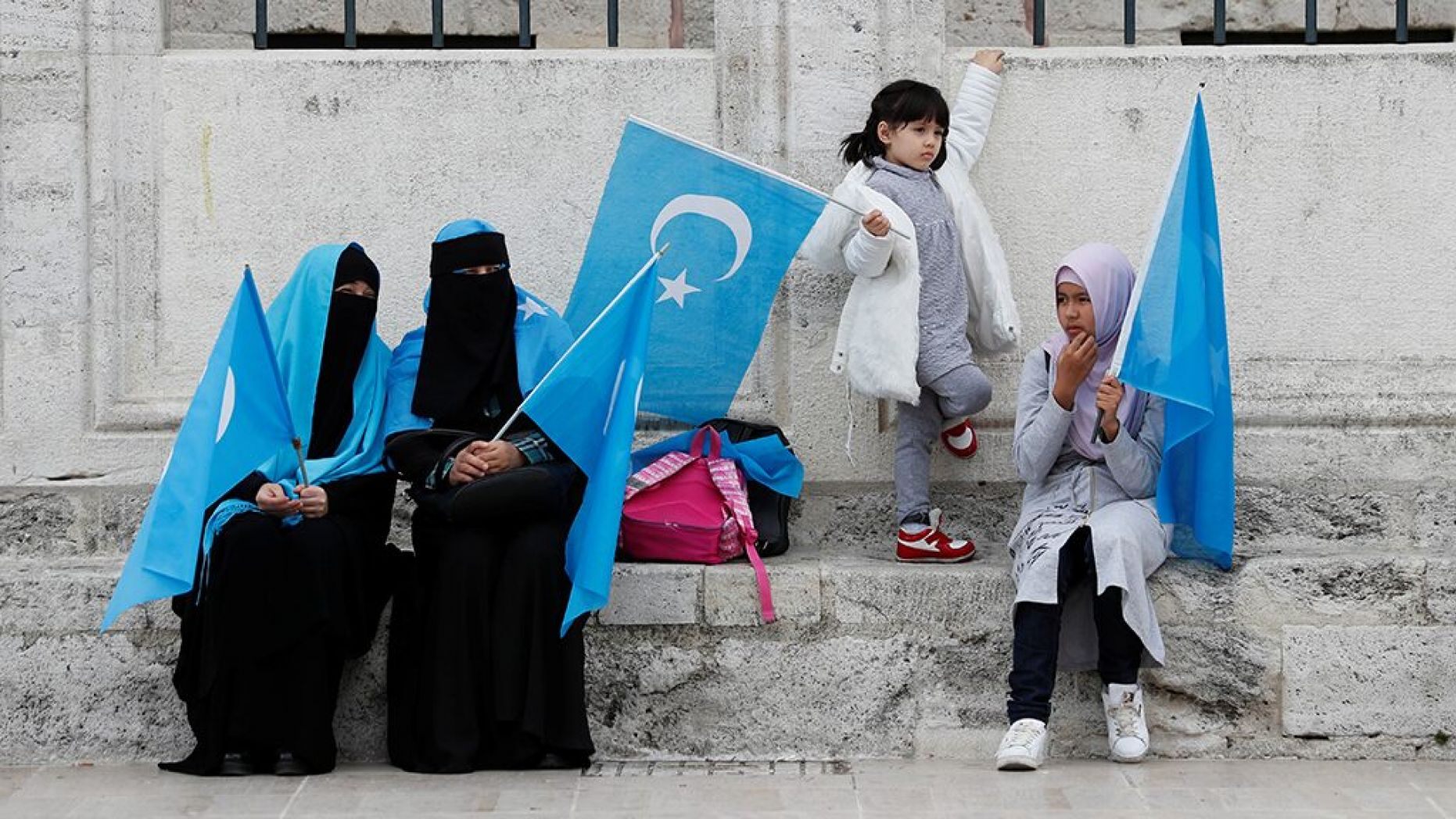 Uighur women hold East Turkestan flags at the courtyard of Fatih Mosque, a common meeting place for pro-Islamist demonstrators, during a protest against China, in Istanbul, Turkey, November 6, 2018. REUTERS/Murad Sezer

Enos also pointed out that beyond this, women in the camps report being injected with unknown substances that cause them to lose their menstrual cycles. Some report being forced to take drugs that prematurely put them into menopause and had other deleterious health impacts, including memory loss. Some women who were eventually released from the camps later report their doctors informed them that they are now sterile.

“The patterns seem to suggest that the CCP is undertaking a massive effort to either completely eradicate, or at least significantly reduce, the population size of the next generation of Uighurs,” the report highlighted.

And while such alleged atrocities are continuing at this very moment – there are steps that the U.S. and the broader international community can take in the march toward some semblance of justice and accountability.

For one, the U.S. Customs and Border Protection on Monday banned imports from four Chinese companies and a manufacturing company suspected of exploiting forced labor from the Uighur minority.

Advocates are hopeful that much more will happen in the near future, including an official, public atrocity determination on crimes committed against Uighurs.

“Given the gravity of the situation facing Uighurs in China, the U.S. should act swiftly to issue an atrocity determination,” Enos said. “In addition to raising the profile of the human rights violations taking place, such a determination sends a clear message to the Uighur people that the U.S. government cares and will take action to preserve their fundamental rights even, and especially when, the Chinese government refuses to do so.”

She is also urging U.S. officials to grant Priority-2 (P-2) refugee status to Uighur refugees; identify additional government officials, other individuals, and entities in China eligible for sanctioning for their human rights violations committed against Uighurs; and create and appoint a special coordinator for Xinjiang at the State Department.

Then there is the matter of the 2022 Winter Olympics, slated to take place in Beijing, which is also attracting a growing chorus of criticism.

“The U.S. should publicly request the International Olympic Committee review China’s suitability to host the 2022 Olympics, among other actions,” Enos said. 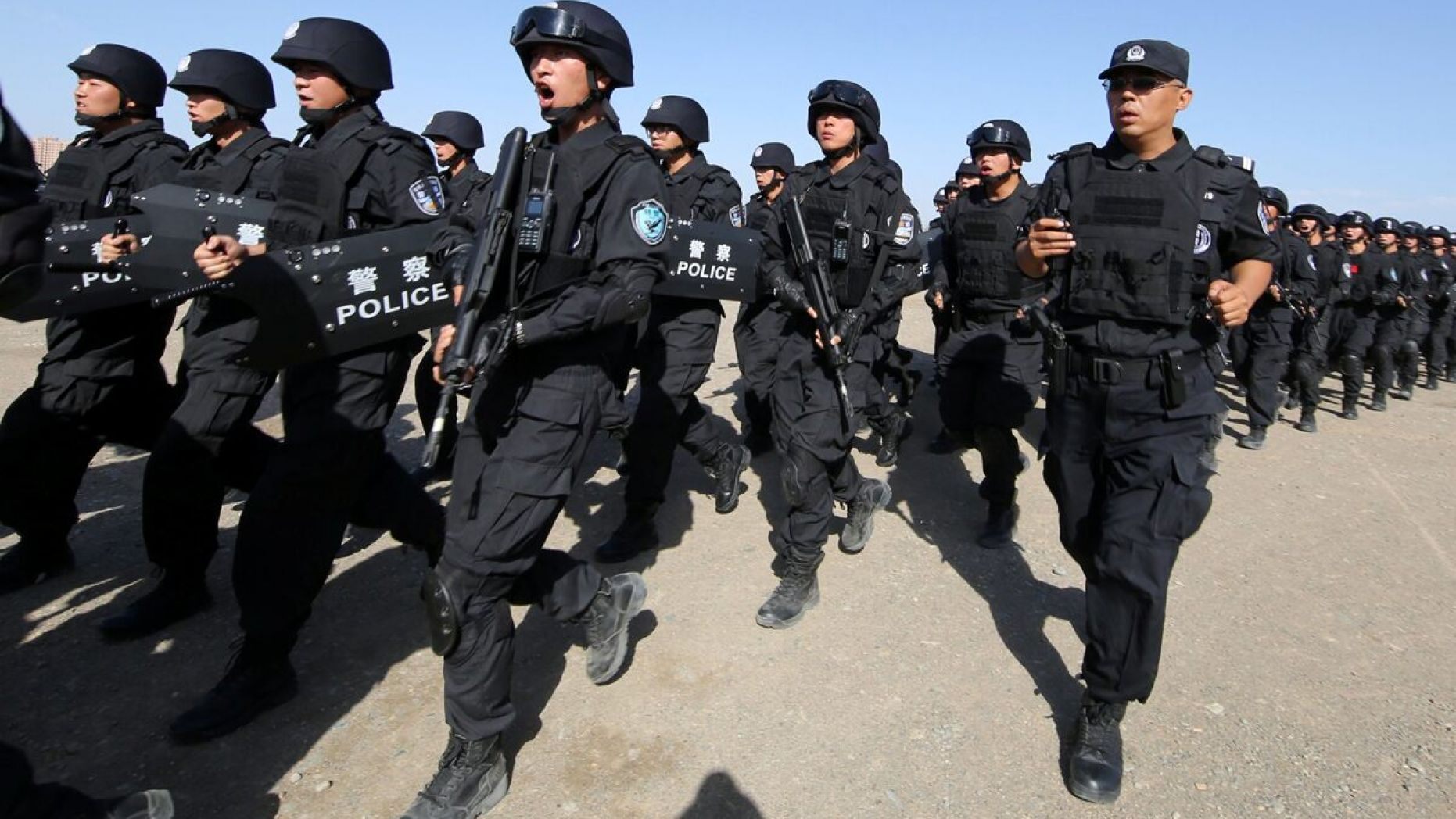 Earlier this month, a coalition of human rights groups penned a letter demanding that the International Olympic Committee (IOC) “reverse its mistake in awarding Beijing the honor of hosting the Winter Olympic Games in 2022.”

The letter pointed out that the 2008 Summer Olympics had failed to improve China’s human rights record, and that since then, the government had established “an Orwellian surveillance network” in Tibet and incarcerated more than a million Uighurs.

The IOC has responded with statements vowing that “the principles of the Olympic Charter will be respected in the context of the games,” and that it must stay “neutral on all global political issues.”

But while the IOC included human rights requirements in the host city contract for the 2024 Paris Olympics, according to the Associated Press, such protocols mirrored on the United Nations Guiding Principles on Business and Human Rights were not included when Beijing won the bid.

Nonetheless, the CCP has long denied allegations and reports of systematic abuse and maltreatment of the Uighurs and other minorities, claiming that what has been dubbed “concentration camps” are instead vocational and Chinese language centers designed to eliminate religious extremism. 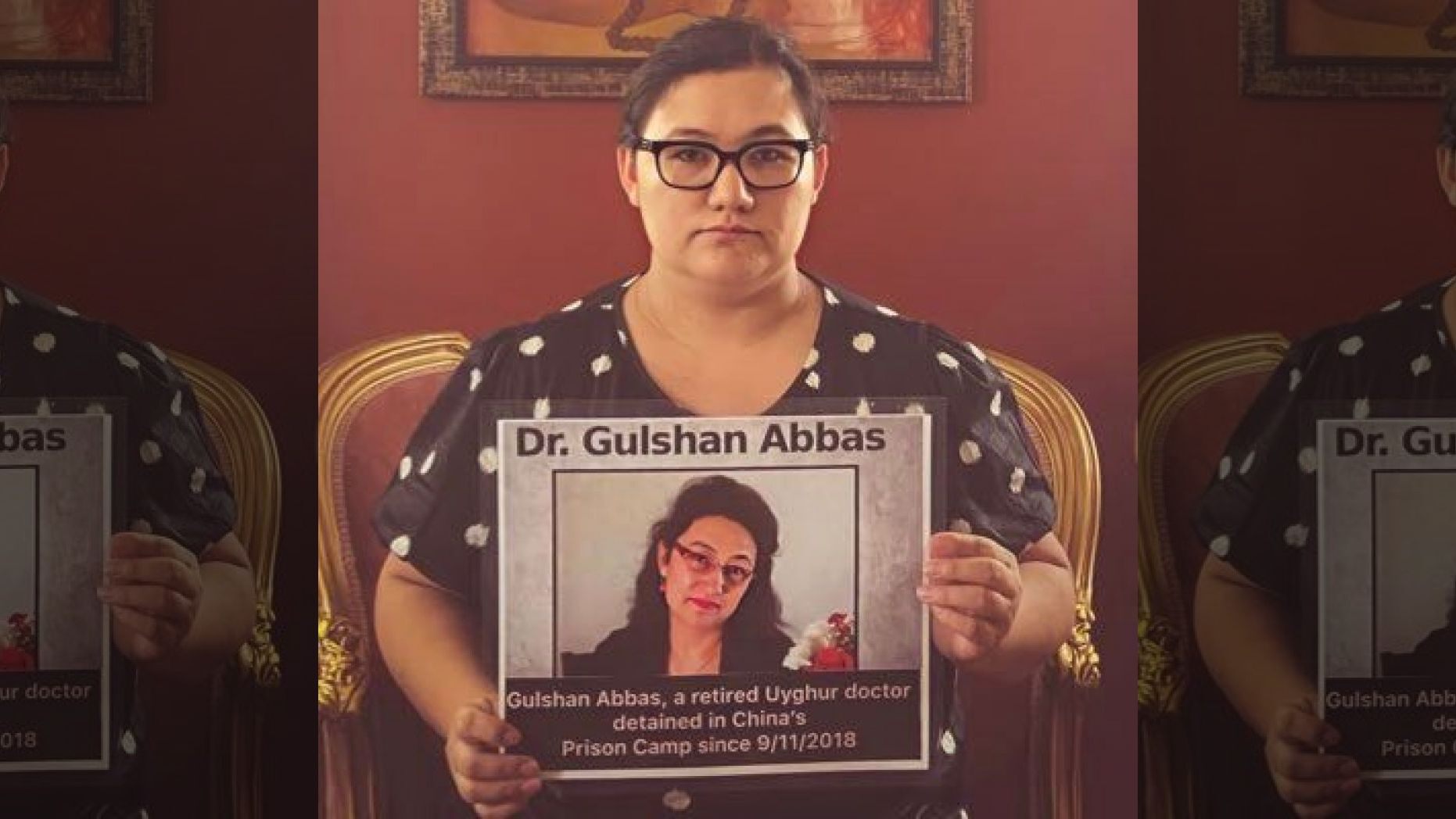 Ziba, a Uighur, appeals for her mother’s return. (Ziba Murat)

The Foreign Ministry has maintained that accusations of mistreatment are “sensational topics concocted by some anti-China forces, a farcical attempt to smear and discredit China.”

But for Murat, and others, who watch helplessly as their language, identity, culture and loved ones are expunged – such outright dismissals of human life are entwined with frustration, despair and guilt that somehow being in the U.S. led to their family members being caught in the crossfire.

“This is a tremendous burden we carry. We want our mother to be part of our life; we want to share these moments of motherhood and love with her. I want people to understand that this is a real thing,” Murat added. “What has happened to all these missing people? Why can’t we communicate with them? Everyone is scared. Every day is a struggle.”