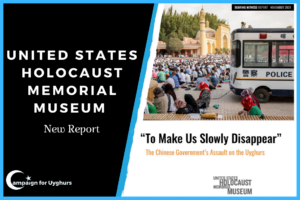 Today the United States Holocaust Memorial Museum released a report on the Uyghur genocide. In it, the range of abuses leveled against the Uyghur people by the Chinese regime are documented in resounding detail. Widespread internment, sexual abuse, cultural genocide, and familial destruction are all recorded. Furthermore, the USHMM writes that “A number of non-lethal acts which may be constitutive of genocide if committed with the requisite intent have been documented as being committed by the Chinese authorities against the Uyghur community.”

Campaign for Uyghurs (CFU) is encouraged by this excellently prepared and written report that adds to the growing pile of evidence against the Chinese Communist Party (CCP). Perhaps most importantly, given the prestigious role of the museum in the study of Genocidal policies, the report argues that “…Chinese policy appears to be largely directed toward destroying, in substantial part, the Uyghur community’s ability to regenerate, primarily through attacking the reproductive capacity of Uyghur women.”

This focus on destroying Uyghur birth rates is critical. It is evident of a goal to prevent births, and thus to eradicate the population in the long term. CFU is proud to have worked with the USHMM in the past. They have been strong allies in the fight for Uyghur justice and have hosted Executive Director of CFU Rushan Abbas on multiple occasions. Following the release of the report, Rushan Abbas said “The United States Holocaust Memorial Museum has done the Uyghur people a great service in writing this report. Here in these pages we can see laid bare the threat facing our people: total destruction. It is encouraging to see such experts in the field of ethnic cleansing and genocide dedicate their time and effort to documenting one of modern history’s worst crimes. The Uyghur people thank the Museum and encourage all to read their report to see for themselves so that this crime may be brought into the light.”

The report also makes recommendations for policy solutions on behalf of the United States as well as the international community. These include forming international coalitions to monitor forced labor standards, enhanced sanction protocols, and increasing refugee limits. The international community does indeed have a responsibility to act, and it is the hope of CFU that this report spurs them to recognize their obligation and join the effort to see the Uyghur genocide brought to an end.