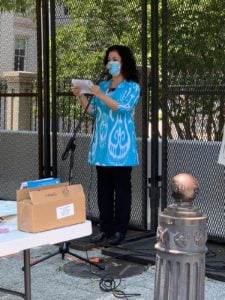 CFU’s Executive Director, Rushan Abbas giving a speech at a rally in front of the White House

Washington [USA], July 28 (ANI): As China blatantly continues to commit crimes against the Uyghurs in the name of homogenisation, the global community has only now realized the way Beijing used the global war on terror post 9/11 attacks as a pretext to carry out the elimination of the ethnic clan.

The irony is not lost on the Uyghur community that the Organisation of Islamic Cooperation (OIC) and all Muslim-majority countries, in particular, are displaying absolutely no interest in the welfare of the Uyghur Muslims, as they are also victims of China’s massive campaign of lies. It is essential that Islamic countries, and our Muslim brothers and sisters, wake up and stand with us before they also become enslaved as our people are. Uyghurs today are a picture of what could be the future for them as China is waging war on Islam and announcing to the world that they are re-writing the Holy Qur’an.

The Campaign For Uyghurs compiled a report last week named “China’s Genocide in East Turkistan – referred to as the Xinjiang Uyghur Autonomous Region by the Chinese government. This report lays out how each condition of genocide as defined by the United Nations is being met by the Chinese regime’s actions towards the Uyghurs. There must be greater recognition of the need to label these atrocities as what they are: Genocide.

The report includes numerous case studies of Uyghurs being forced out of their homes and thrown into concentration camps. Women and children are special targets of the Chinese officials as they attempt to bring down the Uyghur population. Women are subjected to forced sterilisations. According to the news reports, Communist Party cadres are appointed to live inside of the Uyghur homes under a “pair up family” program to supervise the family. For most women, whose husbands are in the concentration camps or prisons, making them subject to sexual abuse, as many of these Chinese men have been photographed and filmed sharing their beds. There are also reports that more than 500,000 Uyghur children are sent to state-run orphanages. There they are made to forget their habits and religion, their identities, and their language. The homes vacated by the Uyghurs are given to Han Chinese from other parts of China who migrate to our homeland. They are given jobs, money and other preferential treatment in order to change the demographics while the Uyghurs are transferring out to be used as slave labour across China in the excuse of “unemployment”.

The United Nations should set up an independent commission, preferably in consultation with the International Court of Justice, to physically probe the atrocities against Uyghurs.

There are many necessary actions to be taken, and we must remember that this is not just the calamity of the Uyghurs, it is a test for humanity. As China continues to push the limits of what atrocities it can get away with, the civilized nations of the world must defeat a common enemy, which is in this case, the worldview of the Chinese regime that justifies the use of concentration camps and slavery, making this acceptable, and even rewarded behaviour in the modern age, by hosting the 2022 Olympic Winter games.

We must no longer perpetuate the belief that decoupling from China is costly. What is the cost of human life? What is the cost of an entire ethnicity, my people? On the contrary, it is too costly to continue to have any cordial relationship with China! 13 tons of hair, perhaps but a portion of what is being taken from prisoners, seized recently, a product of this genocide. How can this image not pierce our conscience? Is this the hair of my sister? Who is benefiting from my sister’s forced labour? We know what this hair represents, a very physical representation of never again happening again. We must act now before the only voice left to speak is one of regret.

My sister Dr Gulshan Abbas was taken as a victim for my activism in the US, and her daughters, American citizens, haven’t had any information on her whereabouts since September 2018. Yet, I am the one repeatedly smeared by China’s state media.

China may buy the corrupt hearts of men. They may threaten, they may punish, they may smear our names and remove earthly possessions, but they will never succeed in silencing us. Will you hear us?