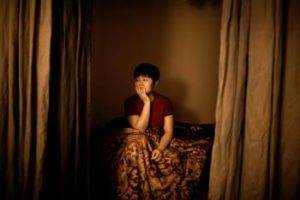 Behind Zulhumar Isaac’s grandmother’s house, there was a large mulberry tree, so vast the branches covered the roof of the garage like a second ceiling. For a week each spring, the tree burst with dark, sweet mulberries, and Humar and her whole family gathered to pick them, the purple juices staining everyone’s fingers for days. Clustered around her grandmother’s outdoor oven, the matrons of the family made nan bread and other dishes traditional to their community, the Uighurs, a predominantly Muslim Turkic group that called an immense territory of deserts and oases home long before it became the northwestern part of China. Humar loved to watch the women knead and turn the dough, their hands and forearms covered in patterns of oil and flour.