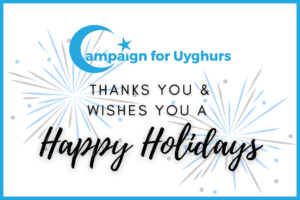 From the entire staff and board at Campaign for Uyghurs (CFU), we wish you a wonderful holiday season and a new year full of success and hope. In reflecting on this past year, despite the challenges, we see a light finally beginning to shine on the horizon for the Uyghurs. It is with overwhelming gratitude that CFU recognizes the allies that brought us to this moment, and thanks them for a year of hard fought victories. As we look forward, it is important we reflect on the results of CFU’s advocacy in 2021.

The year began with a declaration of genocide from the United States government as one of the final acts of the previous administration, which CFU has long advocated for. CFU released a Genocide Report in July of 2020 in five languages and supported House and Senate resolutions condemning it as such. Proudly, the current administration has retained and strengthened this determination, creating an international coalition that shares this recognition.

Likewise, at the end of 2021, the United States Congress officially passed the Uyghur Forced Labor Prevention Act. This law, which puts the assumptive power in the hands of customs and border officials to prevent goods tainted by forced labor from entering the United States, has been the subject of thousands of hours of congressional advocacy. CFU’s Executive Director Rushan Abbas testified before Congress twice on this very issue. CFU initiated and helped to launch the Uyghur Caucus in the House of Representatives alongside Representatives Chris Smith (R-NJ) and Tom Suozzi (D-NY). As a result, the Uyghur cause was able to express itself firmly in the lower chamber.

CFU has been hard at work abroad as well, hosting activist training workshops in Turkey and Germany to encourage and empower Uyghur youth and women to engage with governments, grassroots organizations, and diaspora communities. Additionally, a successful campaign to work with youth organisations in Turkey establishing and funding the Hope House in Istanbul has helped Uyghur youths struggling with homelessness achieve stability and safety. CFU was also proud to participate in private screenings of “In Search of My Sister” by US embassies and consulates globally. This is a documentary which reveals the plight of millions of Uyghurs searching for information on their relatives in East Turkistan, through the lens of Rushan Abbas’ search for her sister Dr. Gulshan Abbas. As part of a continued European outreach, Ms. Rushan Abbas  spoke twice this year at panels organised by the European Foundation for Democracy, most recently on December 8th on Uyghur Forced Labor issues.

In the United Kingdom this year, Campaign for Uyghurs participated in both sessions of the Uyghur Tribunal, where the Executive Director Rushan Abbas served as a fact witness. On December 9th, 2021 the Tribunal brought down their final judgement on what is happening in the Uyghur homeland: Genocide.

As part of outreach in the UK and Turkey, CFU and The Center for Uyghur Studies led by Abdulhakim Idris have worked on issues at the intersection between Muslim communities and the Uyghur genocide. Through this work, a large coalition of Muslim organizations established #Stand4Uyghurs in the UK, a protest movement that garnered significant international attention.

As the year wound down, it was a proud moment to see advocacy efforts surrounding the 2022 Beijing Olympics come to fruition. Earlier this year CFU joined forces with the Peace Project and Jewish World Watch to launch the Berlin-Beijing campaign, drawing parallels to the 1936 Berlin Olympics in Germany and the upcoming games in Beijing. The United States, the United Kingdom, Australia, Canada and other countries have formally endorsed a diplomatic boycott of the event, a demand long articulated by activists.

In recognition of efforts this year, CFU was the proud recipient of the prestigious World Movement for Democracy Courage Tribute award. This recognition is a point of great pride, but it truly belongs to the thousands of grassroots organisers and activists who worked tirelessly to expand the coalition of voices calling for an end to Uyghur genocide.

There remains much work to be done. The ultimate celebration will come when the final camp is closed, the final Uyghur freed, the perpetrators brought to justice, and all Uyghurs are able to achieve freedom and democracy. Together, we will see it done.