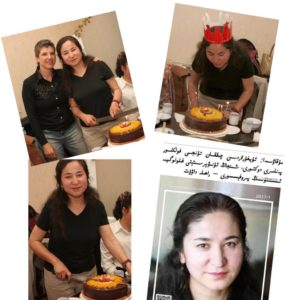 On the occasion of her 54th birthday, Campaign for Uyghurs remembers Internationally renowned Uyghur scholar Rahile Dawut, who has been missing for the past three years. May 20th is her birthday, and we, the global community, wonder how she will mark it. Where is she spending the passage of this anniversary? Does she know how many people remember her, how many people are advocating for her return to us, her Uyghur community? On this occasion, we want to remember her in the words of some of her many loved ones.

Her daughter Akida marked her mother’s birthday, stating,  “Mom, today is your 54th birthday. I feel devastated to think that a good and law-abiding person like you has to spend a birthday in an unknown place, without the warmth of your family. I will keep fighting for you until I see you.”

Rahile’s disappearance sent shockwaves through an already traumatized community. As Rushan Abbas, executive director of CFU, said in a speech at Indiana University, “Among the many Uyghur public figures, intellectuals and academics who have “disappeared” are Rahile Dawut and Kuresh Tahir, expats from this campus-Indiana University. Uyghur academics are under major attack, whether they are traveling abroad legally, publishing textbooks or literature with the government’s permission, or simply just guilty of not being Han Chinese.”

Rahile’s close friend, Lisa Ross, remembers: “In 2005, I had the gift of celebrating Rahile’s birthday with her classmates over hotpot in Hotan. Her vibrancy, laughter, intelligence, and generosity has made the whole country one thousand times more attractive to the world. Rahile’s release will only make the world a better place.” She continued by saying: “To the party officials overseeing Rahile’s disappearance: She only spoke in a positive way about the government and always encouraged foreign scholars and her students to focus on culture, never politics. Her release, along with so many other amazing Uyghur intellectuals and artists, can only help move your country forward.”

Happy Birthday, Rahile Dawut. Today CFU calls on the Chinese Communist Regime and Xi Jinping to release Rahile Dawut, the thousands of Uyghur intellectuals like her and the millions of innocent Uyghurs, Kazakhs and other Muslims in the concentration camps. End these crimes against humanity before the whole world associates China only with bloodshed and evil.