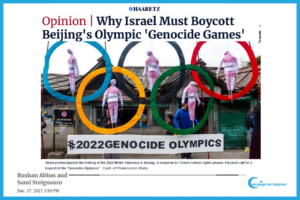 Today, Haaretz  published an op-ed co-written by Campaign For Uyghurs (CFU) Executive Director of CFU Rushan Abbas and Holocaust survivor Sami Steigmann. The piece outlines the importance of an Olympic Boycott in 2022, while China is committing genocide, especially in the case of the Israeli government. The unique position of the state of Israel as a potential leader on issues of genocide presents a moral obligation for the state to act in the face of one of the greatest atrocities of the 21st century. The Uyghur genocide needs a full international response, which must include the government of Israel’s voice.

Abbas and Steigmann wrote “The Holocaust revealed that genocide is too much for a single group to bear. Instead, it is up to the world to recognize the shared humanity between all people, and demand that no single group be deemed unworthy of basic human dignity. However, that lesson comes with tests. We are facing one right now, in East Turkistan. If we seek to honor the memory of the Holocaust, we must behave differently when we see, again, atrocities aimed at wiping out a people. We must act now, at this moment, for these people. We cannot be indifferent to this fight, or we continue to dishonor those we have failed in the past.”

Both authors hold a personal connection to the atrocities of genocide. Mr. Steigmann is a first-hand witness of the Holocaust and all of it’s evils, as a survivor. Ms. Abbas has seen her family suffer in the current Uyghur genocide, writing that “My own sister, Dr. Gulshan Abbas, a retired medical doctor who lives in the Uyghur region, has vanished, and has remained missing and incommunicado for more than three years now. Her disappearance at the hands of the Chinese regime came in response to my activism in the United States: She was arrested just six days after I spoke at a panel meeting in Washington D.C. on the abuses suffered by the Uyghurs.”

Indeed, the test the world is facing in East Turkistan is one of the gravest of our generation. As technological advancements accelerate the speed at which information is collected and travels, the tools of repression and genocide become more efficient. If the world fails to speak up now, the precedent this catastrophe will set will ensure decades filled with further atrocity, genocide, and oppression. Activists must continue the call for a boycott of the Olympics and help expand the coalition of nations that will withhold diplomats from the event in 2022. The world must show Beijing that there can be no games while genocide rages in East Turkistan.