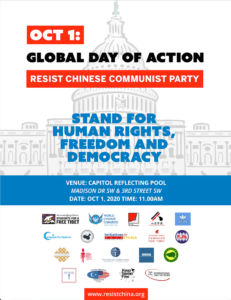 Campaign for Uyghurs is pleased to be one of the organizers of the upcoming Global Day of Action. The event has been organized in cooperation with an informal coalition representing Uyghurs, Tibetans, Southern Mongolians, HongKongers, Taiwanese, and Chinese dissidents who desire to resist the CCP and their oppressive policies.

On October 1, coinciding with the Chinese National Day, groups across the world will come together to stand in rejection of CCP tyranny. The Chinese national holiday is meant to commemorate the founding of a tyrannical regime, the People’s Republic of China. This is far from being an occasion to celebrate, rather, it is the day that the Uyghur homeland, East Turkistan, was occupied by the Chinese communist regime. This anniversary is a somber occasion upon which we encourage the international community to reflect upon the death, devastation, and evil that has been inflicted on the world since this monstrous regime came to power. In particular, this event stands to remind the Uyghur community in particular of the events that were set in motion leading to active genocide today.

In anticipation of the occasion, Dr. Rishat Abbas, Senior Advisor for Campaign For Uyghurs and for the World Uyghur Congress stated “The Chinese Communist Party is a threat not only to the Uyghurs who they are deliberately exterminating with this current genocide, but also to all nations and ethnic groups. The continuing deliberate stoking by the Chinese regime of ethnonationalism in China and across the globe must be recognized as what it is: authoritarian brutalization of any who do not agree with the regime’s priorities and policies.”

We encourage everyone to join us on October 1st in a city near you, or to participate in virtual representation as we make our voices heard together. It is time to create a barrage of truth, and to stand together to confront evil.