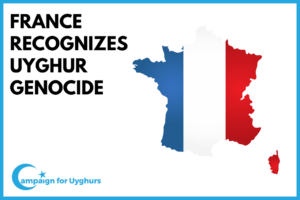 Campaign for Uyghurs (CFU) celebrates the passage a genocide declaration by the French National Assembly regarding the plight of the Uyghur people in East Turkistan. France now joins the coalition of nations that have positioned themselves firmly as allies and defenders of human rights at this critical juncture. In addition, the National Assembly has passed a resolution on Due Diligence in the European Union, demanding that corporations be held accountable for engaging in illegal labor practices that encourage and facilitate the Uyghur genocide.

Executive Director Rushan Abbas said “It is encouraging at this time to see continued action from governments on this imminent crisis of our time. As the Olympic Games in Beijing approach, actions like this show that the world will not tolerate a regime that has made it an express goal to destroy the Uyghur people. In France today the legislature rejected this regime’s actions, and instead has condemned this genocide as unacceptable, and called for regulation of the financial engine that powers it. France has taken their place on the correct side of history. Let the world follow their example, and the example of those that join them in condemning this genocide with one voice!”

This is the first National declaration of genocide following the finding of the Uyghur Tribunal in 2021. Each new nation that passes this designation carves an easier path for the next, adding to the already massive cadre of evidence. As more nations recognize this atrocity for what it is, a genocide, there must also be a growing call to abide by the responsibilities laid out in the genocide conventions to bring it to an end. For truly words without action breed only continued indifference.

CFU is especially proud today for Dr. Dilnur Reyhan, President of The European Uyghur Institute. She said today “I am happy to see the fruit of the hard work of European Uyghur Institute since a year without any support by politicians on this particular question of Uyghur Genocide. We had mobilized again the whole French society. This is the victory of our nation against the Chinese lobby.”

CFU would also like to offer special thanks to Mr. Raphael Glucksmann for his tireless advocacy in the Assembly on behalf of the Uyghur people. Without his single voice, the unified voice of France would not be able to speak today. It is the effort of these people who continue to march the cause of Uyghur rights forward. When the sun rises on the end of the Uyghur genocide, these activists and those who heard their call today in France can know it was their work that brought about that new day. Now is not the time to rest, but to persevere. With the Beijing Olympics right around the corner, France should join the coalition of nations engaged in a diplomatic boycott, to demand international accountability for the CCP’s crimes.