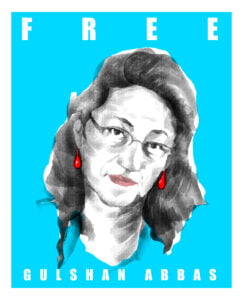 On the date of the significant determination of the United States State Department that the atrocities committed by the Chinese Communist Party meet the definition of genocide and crimes against humanity, the daughter of Dr. Gulshan Abbas, Ms. Ziba Murat, received a personal letter from the Secretary of State Mike Pompeo, in which he stated that ‘We will continue to raise her case with the People’s Republic of China (PRC) and call for her immediate release.”

When asked about the classification of the Chinese regime’s actions as genocide, incoming Secretary of State Antony Blinken affirmed in the Senate Foreign Relations Committee confirmation hearing “That would be my determination as well.”

Dr. Rishat Abbas, Senior Advisor for Campaign For Uyghurs, Honorary Chairman of Uyghur Academy, and brother of Dr. Gulshan Abbas said “We are thrilled to see this determination of crimes against humanity and genocide committed by the CCP. On behalf of my family and all families of Uyghur victims suffering under this genocide, I want to thank Secretary Pompeo and the US government for their strong efforts. We have great hope that the new administration will continue to pressure the Chinese government to stop the genocide and release all Uyghurs including my sister Gulshan Abbas.”

Ziba Murat, daughter of Dr. Gulshan Abbas says “As the daughter of someone who has been mercilessly imprisoned because of this genocide, I am deeply grateful that  Secretary Pompeo heard my cry for help. My sincere hope is that the incoming administration, Secretary of State, and POTUS will bring my mom home to her granddaughters.” Dr. Abbas’s daughter Zamira Murat stated that “It’s so encouraging to see that the United States remains united in recognition of the gravity of the Chinese regime’s actions. I feel light at the end of the tunnel. Finally, my mother could have a chance to be reunited with her family.”

Campaign For Uyghurs (CFU) is encouraged by seeing that bipartisan leadership in the U.S.  demonstrates the acute responsibility many leaders have kept insight as they fight to uphold the values of democracy and decency. These actions serve to grant enormous hope to the Uyghur community, and to the family of Dr. Gulshan Abbas in particular, as her case is representative of the ways in which retaliation is taken not just against those within China’s borders, but against those who are U.S. citizens as well. Campaign For Uyghurs urges Secretary Blinken to address her case with Chinese officials with her release as a condition for dialogue, and demand the CCP cease its crimes against humanity in order to be able to continue any semblance of normalizing relations. The Chinese regime was wrong to believe that addressing crimes against humanity was a partisan priority for the United States. All leaders with a conscience will stand to condemn their cruelty, and the CCP will face consequences for its attacks on innocent lives.