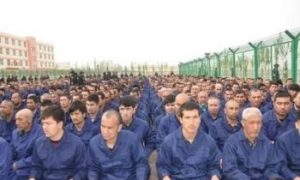 Experts are now fearing that the deadly Coronavirus, China’s most recent viral disease that has reportedly killed 82 people so far, has a potential of causing massive outbreaks in the northwestern province of Xinjiang, where more than 2 million Uyghur and ethnic Muslim minorities are being detained in concentration camps.

The Coronavirus has been confirmed in 44 different cases around the world, including Japan, the US, Australia, and France, although there are reportedly no deaths so far outside of China. Causing severe respiratory infections, there is no specific cure or vaccine as of now. Most of those who have died as a result of the virus have been elderly people or those with pre-existing respiratory problems.

Having reportedly originated from the city of Wuhan in Hubei province, the city has now essentially been fully quarantined. Non-essential vehicles have been banned from the roads, and authorities are reportedly checking people’s temperatures at the borders of the province.

READ THE FULL ARTICLE AT TMV