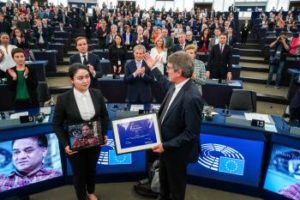 The European Parliament on Thursday approved a resolution condemning the mass incarceration of Uyghurs in northwest China’s Xinjiang Uyghur Autonomous Region (XUAR) and reiterating its call for unfettered access to the region for independent journalists and international observers.

The resolution was approved a day after the parliament presented the 2019 Sakharov Prize—its top human rights award—to the daughter of jailed Uyghur scholar Ilham Tohti for “fighting for the rights of China’s Uyghur minority” in the XUAR, where authorities are believed to have detained some 1.8 million Uyghurs and other Muslim minorities accused of harboring “strong religious views” and “politically incorrect” ideas in a vast network of internment camps since April 2017.

“[The European Parliament] strongly condemns the sending of hundreds of thousands of Uyghurs and ethnic Kazakhs to political ‘re-education camps’ on the basis of a system of predictive policing,” the resolution reads.

“[Parliament] urges the Chinese Government to put an immediate end to the practice of arbitrary detention without charge, trial or conviction for a criminal offence of members of the Uyghur and Kazakh minorities, to close all camps and detention centers, and to immediately and unconditionally release those detained.”

The resolution also demands that Chinese authorities “allow free, meaningful and unhindered access” to the XUAR for members of the media and international observers, including the United Nations High Commissioner for Human Rights, adding that the European Union and its members states “should take the lead” during the next U.N. Human Rights Council on establishing a fact-finding mission to Xinjiang.

Other points listed in the resolution include the parliament’s call on China to immediately and unconditionally release Tohti and other rights campaigners, activists, lawyers, journalists and petitioners it said had been detained solely for the peaceful expression of their freedom of expression, and to ensure that their families and lawyers are not subjected to torture or other ill-treatment.

The resolution also expressed concern over the harassment of Uyghurs abroad by the Chinese authorities in order to force them to act as informants against other Uyghurs, return to the XUAR, or remain silent about the situation there, sometimes by detaining their family members back home.

It condemned the intensification of control strategies in the region bolstered by technological surveillance methods, as well as reports of the possible use of forced labor from the internment camps in the supply chain of international companies, and urged the Chinese government to immediately publish a list of all those in detention, who have been released, and who have disappeared.

The resolution calls on the European Parliament “to adopt targeted sanctions and asset freezes, should they be deemed appropriate and effective, against the Chinese officials responsible for devising and implementing the policy of mass detention of Uyghurs and other Turkic Muslims in Xinjiang and for orchestrating a severe repression.”

It marks the third time in slightly more than a year that the parliament addressed the situation in the XUAR with a resolution.

The Munich-based World Uyghur Congress (WUC) exile group on Thursday welcomed the passing of the resolution, which it said “demonstrates its and the EU’s resolve to take meaningful action to stop China’s crimes against humanity against Uyghurs.”

The group said in a statement that the passing of the resolution and Wednesday’s awarding of the Sakharov Prize to Tohti “sends a clear message to the Chinese government that the EU is willing to take concrete steps to close the internment camps and stop the persecution of Uyghurs and other ethnic groups in East Turkistan,” using a name preferred by many Uyghurs to refer to their historic homeland.

Dolkun Isa, the president of the WUC, told RFA’s Uyghur Service that the approval shows the European Parliament “will not stand idly by” as China commits rights abuses in the XUAR.

“Now the Uyghur people feel we are not alone and that we have more friends and supporters in the world in our common desire for human rights and democracy,” he said.

Earlier on Thursday, China’s Foreign Ministry spokesperson Geng Shuang called Tohti a “terrorist” and refused to confirm his status during a regular press briefing in Beijing after his daughter, Jewher Ilham, said at the Sakharov Prize awarding ceremony that she did not know whether he is still alive and hadn’t heard news of him since 2017.

Geng also denied knowledge of the rights prize, according to a report by Agence France-Presse, just as the foreign ministry did in October when the award was announced.

“I don’t know the award you mentioned,” Geng said, adding that Tohti was “a criminal sentenced by a Chinese court according to the law.”

“We hope that relevant parties can respect China’s internal affairs and judicial sovereignty, and not help publicize the unworthy cause of a terrorist,” he added.