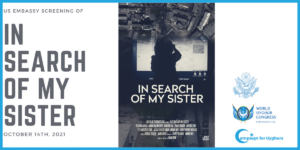 The United States Embassy in Germany hosted a screening on October 14th of “In Search Of My Sister”. This documentary tells the story of Rushan Abbas’s sister, Dr. Gulshan Abbas, a missing retired doctor who was abducted in retaliation for an American citizen’s activism. It also highlights the deaths of WUC president Dolkun Isa’s parents and chronicles the ongoing crisis of the Uyghur genocide. The film utilized interviews with camp witnesses, activists, and scholars to provide a comprehensive view of the situation. Dr. Abbas disappeared in 2018 following an appearance by her sister on a panel at the Hudson Institute in which she decried the Uyghur Genocide. The film follows the work of a community of Uyghurs and international activists as they confront the Chinese Communist Party’s atrocities through the lens of this one person’s experience. The screening also coincided with the exhibit launch of “Uyghur Voices” Human Rights Exhibit in Berlin, put on by the U.S. Mission and the World Uyghur Congress

The President of the World Uyghur Congress, Mr. Dolkun Isa, who was present at the screening and delivered remarks, stated “This is an important movie that should be watched by everyone, because it tells our stories as Uyghurs through a single story of the disappearance of Gulshan Abbas, Rushan’s sister. Her case demonstrates exactly how the Chinese government targets Uyghurs for simply existing. I am honoured to be part of this film screening, and host our exhibition event jointly with my long time friend Rushan Abbas, and Campaign for Uyghurs.”

Executive Director of Campaign for Uyghurs (CFU) Rushan Abbas said “I am very pleased that my sister’s story is being told within an embassy of the United States, and that it is serving to tell the story of millions of other Uyghurs and the Uyghur genocide. It also demonstrates the lies and denials of the CCP and those who would serve as its puppets. This film is the result of effort from countless individuals, and I am immensely proud of the product. I hope it inspires all who see it to take action at this crucial moment in history, and to continue to demand accountability and freedom on behalf of the Uyghur people.”

Campaign for Uyghurs is grateful to the embassy for their support in showing this film, and looks forward to additional showings at the consulates in Munich and Leipzig. The story of the Uyghur genocide is a tapestry of lives that have been disrupted and destroyed. The immensity of this crime can be overwhelming, but the story told in these images is one that is repeated in hundreds of thousands of families around the world. Their relatives are missing, like Dr. Abbas is missing, and they deserve answers.