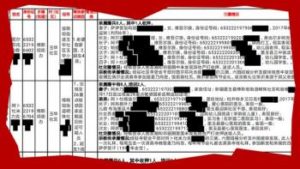 Fresh reports have emerged about the extent of the crackdown by Chinese authorities against Muslim Uyghurs in the central region of Xinjiang after a leaked internal Communist Party document was obtained by German media.

The newly leaked document, known as the “Qaraqash Document” or “Qaraqash List” in reference to the Xinjiang town referred to in the document, shows that detainees were put into what China described as “re-education systems” for offenses related to common religious practices such as growing a beard or wearing a veil.