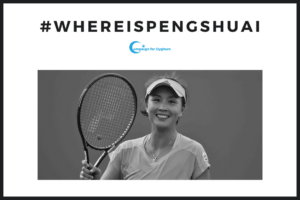 Campaign For Uyghurs (CFU) condemns the disappearance of Peng Shuai and lack of access to the free press. The type of action taken against an individual who has come forward bravely with allegations of sexual assault is characteristic of the Chinese regime which has forcibly disappeared millions of Uyghurs facing genocide, political dissidents, and other prisoners of conscience.

This particular case also shines a light on the misogynistic, brutal mentality of the Chinese Communist regime, which not only seeks to punish, intimidate, and silence victims, but has likewise subjected Uyghur women to the most brutal sexual torture and attacks on bodily autonomy, including forced sterilizations, forced abortions, forced marriages, and mass rape.

These atrocities are occurring on the watch of the international community and with little outcry from feminist organizations. CFU continues to call on civic society leaders to demand accountability for the Chinese regime.

As attention has rightfully turned to the International Olympic Committee’s complicity by participating in the CCP’s shameless propaganda show, it is time for the international community to legitimize the long-standing calls by human rights activists, organizations, and global leaders who have called for a boycott of the Beijing 2022 Olympics. It is unimaginable that any nation should feel peace not only morally, but practically, as regards sending athletes to participate in games held in a country carrying out active genocide and forcibly disappearing athletes.

Remarking on the developments, CFU Executive Director Rushan Abbas stated “As the sister of an innocent woman, Dr. Gulshan Abbas, who was forcibly disappeared by the Chinese authorities, with no news for more than 3 years, I am of course pleased to see that the international community is standing up to demand that Peng Shuai’s wellbeing be proven. However, it is confounding that active genocide was not the catalyst for such impassioned calls against the IOC and to boycott Beijing. I hope this will be the final necessary wakeup call regarding the horror of Beijing hosting the 2022 Games.”