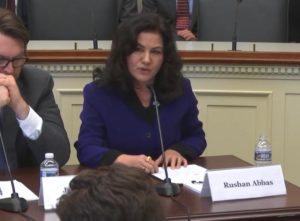 Congressman McGovern, Senator Rubio, and distinguished members of the commission thank you for this opportunity to testify before you today on behalf of my own missing family members and the millions of Uyghurs disappeared into China’s concentration camps and the world’s largest government-directed human trafficking forced labor network.

What is happening to Uyghurs and other Turkic people is common knowledge by now. The Uyghur ethnic identities are stigmatized, and religion is demonized. Racism and cutting-edge technology are used as a weapon of Chinese nationalism to exterminate my people while challenging human dignity and basic survival rights.

My sister, Gulshan Abbas, a retired medical doctor is one of these victims. She was abducted by the CCP in September 2018, in retaliation for my speaking out about China’s human rights abuses in East Turkistan at the Hudson Institute.  China has allowed no contact with her since she disappeared and has not even provided proof of life and her whereabouts.

China claims that these sprawling camps are humane vocational-job training centers. This is a lie.  Detainees include medical doctors, academics, business people and professionals, as well as young children and the elderly, none of whom need job training.

Well researched reporting indicates these camps serve to break people’s spirit and to turn them into an abundant supply of forced labor.

So, my question is this: who is the buyer of my sister’s forced labor? GAP, L.L. Bean, Calvin Klein, or H&M: is my sister in one of your contractors’ factories? Are you complicit in China turning a doctor into a textile worker as a forced laborer in your factories?

Nike: is one of your largest factories in China using my sisters-in-law as part of its Uyghur forced labor from Hotan? One was a nurse and another a teacher – were they transformed by the camps into modern-day slaves to produce your shoes? Or did you prefer younger Uyghur women forced to work thousands of miles from home, so they would not bear children while they were housewives like my third missing sister-in-law?

When my sister was taken by China, I had no idea finding her again would involve finding out U.S. companies are so shockingly complicit in such disappearances. 75 years ago, companies like Siemens, BMW, and Volkswagen used forced Jewish labor and are now once again complicit in their suppliers’ use of forced Uyghur labor, making today’s concentration camps a profitable venture. But, this time, the rest of the world’s top companies have joined in such complicity.

U.S. law requires Global Magnitsky sanctions on individual offenders and prohibits any trade-in products made with forced labor, so who is preventing the enforcement of the law? Has Xi Jinping been granted veto power over U.S. laws?  Exactly what part of “Never Again!” translates into not to sanction the Chinese perpetrators of today’s concentration camps and separate them from their enablers?

It saddens me, to see the venal ruthlessness of the reality of the world communities, as they are idle against this genocide of my people. Not only China is getting away with genocide but getting ‘rewarded’  with hosting the Winter Olympics 2022. It angers me, to see my sister and other millions of Uyghurs becoming human collaterals of international trade deals and economic benefits. It worries me, to see China becomes a power able to strong-arm the world with, trade threats, the power of the Belt and Road Initiative, debt-trap diplomacy and manipulation within the U.N.  Furthermore, China is bribing and leveraging some key politicians, the media, and scholars around the world and has successfully silenced international condemnation of its shameful crimes. What do you think is going to happen if this remains unchecked?

Continuing to do business as normal with China today is being complicit with genocide and supporting the spread of China’s totalitarian Communistic Nationalism to the world. History will remember those who act and those who fail to do so. We are all responsible for what happens next.

(The video of the full CECC session is here.)