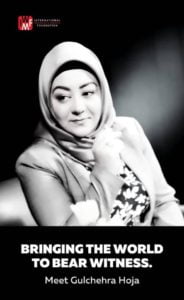 After joining RFA in the US, she was sent a “red notice” from China, banning her entry to the country. Her family in East Turkistan face cultural genocide.

RFA Uyghur Service is the only Uyghur-language news service operating outside of China. Some of the most crucial reporting on the situation on the ground comes from this service.

Gulchehra Hoja (Xinjiang region of China)Broadcaster, Radio Free Asia – @GulchehraHoja When Gulchehra Hoja began reporting for Xinjiang TV, the pressure to promote the Communist Party led her to Radio Free Asia (RFA), which offered the only autonomous Uighur-language news outside of China. After joining RFA in the U.S., Gulchehra was sent a “red notice” from China, banning her from returning home. Today, two dozen of her family members – among an estimated 800,000 to 2 million Uighurs and other Muslim minority groups in detainment – face “cultural genocide,” according to Gulchehra. Categorized as “re-education” facilities, these detention camps in Xinjiang also include crematoriums. Following Gulchehra’s risky interviews with escapees, prison guards and other officials, she testified in front of the U.S. House of Representative’s Committee on Foreign Affairs on the dangers of reporting on human rights.

“Right now, the pursuit of truth, and the need for diverse journalism, is at a critical high,” said the IWMF’s Executive Director Elisa Lees Muñoz. “This year’s Courage in Journalism Award winners remind us that those who tell the world’s most vital stories, whatever the risk may be, are our true heroes. We congratulate Jessikka, Solafa, Yakeen, and Gulchehra for your spectacular work and uncommon bravery.”

Jessikka Aro reports from the frontlines of Russian information warfare, conducting courageous investigations inside troll factories while enduring incessant attacks and sexual harassment. Committed to stories of human rights and social unrest, Solafa Magdy was arrested in Cairo in November 2019 for her reporting and is still imprisoned under deteriorating conditions. Yakeen Bido broadcasts from one of the most dangerous environments on earth – Idleb – and is the first woman to appear on-camera from the city to document the price of war on the vulnerable. Having lost everything except for her life, Gulchehra Hoja reports on Uighur detention camps in China. Her entire family faces constant government surveillance, harassment and have endured numerous detentions.

“I am extremely honored to receive the Courage in Journalism Award,” says Hoja. “I hope this recognition will encourage fellow journalists and many others to stand up for justice and truth.” Bido adds, “This award is a symbol of courage not only for me but for all women working in the press.” She continues, “It is an honor to have my name among the other winners – women who sacrifice their personal freedom in order to face social injustice.”

About the 2019 Courage in Journalism Winners

Jessikka Aro (Finland)Journalist, Yle – @JessikkaAroJessikka Aro’s focus as a journalist – Russian information warfare – is a self-proclaimed, “life’s calling.” In 2014, Jessikka launched a project on Kremlin-related trolls, their impact on Finland and freedom of speech. Since then, Jessikka’s reporting with the Finnish Broadcasting Company has received numerous awards and taken her to troll factories in St. Petersburg. However, the past six years have also brought crude attacks from pro-Russia activists. Even though she was forced to flee her home for two years in 2016, the sexual harassment and death threats do not dissuade Jessikka. Her book, “Putinin Trollit,” was published last September, and in 2019 she received the International Women of Courage Award, which was rescinded by the U.S. Department of State, reportedly because of Aro’s criticism of the Trump administration on social media.

Solafa Magdy (Egypt)Multimedia Freelance JournalistSolafa Magdy is a multimedia reporter based in Cairo. Her reports have covered political transition and social unrest in Egypt, minority rights, women’s rights, education, human rights, refugees and sexual harassment in Egyptian society. Her work has appeared in Alroeya (UAE), TRT World, Mada Masr and BBC Egypt. An expert in mobile journalism, she is the founder of Everyday Footage, a school that trains young women journalists and researchers in mobile reporting. Solafa has been imprisoned in excruciating conditions since November 2019, when she was abducted and detained following a raid of independent news outlets in Cairo. She has been jailed in pre-trail detention without access to a fair trial, exceeding what is lawfully prescribed in Egyptian law.

Yakeen Bido (Syria)Broadcast Freelance Journalist – @AlhasanMaharYakeen Bido spent her early years in Idleb moving between her hometown and latakia during the onset of Syrian war in 2011. Following her studies in sociology, Yakeen returned to Idleb, and for five years she’s reported on political, military and humanitarian issues enduring violent interrogations, smear campaigns and multiple arrests. Syria ranks 174 out of 180 countries in the RSF 2020 Global Press Freedom Index, but Bido continues to report on-camera – she is the first woman to broadcast from the region. Risking her life from the frontlines, Yakeen faces death threats from Assad regime-supporters due to her identification as a woman and role as a journalist.