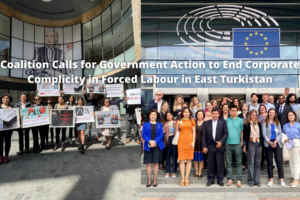 BRUSSELS – Today, the Coalition to End Uyghur Forced Labour (the Coalition) urged all governments and corporations to take steps to end abuses against Uyghurs and prevent complicity with forced labour, at a public panel at the European Parliament in Brussels. As millions of Uyghurs are currently being detained by Chinese authorities and held in forced labour camps in the Uyghur Region of China or forcibly transported to work in facilities in other regions in China, the panel of experts discussed how corporations must be held accountable for ensuring their supply chains do not include Uyghur forced labour. With the European Union currently developing new due diligence and forced labour laws, the Coalition calls upon the EU to demonstrate global leadership and design these tools to be effective to respond to the Chinese government’s widespread abuse of the Uyghur people and other Turkic and Muslim-majority peoples.

Some progress has been made recently in the fight to end Uyghur forced labour, including G7 commitments in June and October 2021 to address forced labour of targeted ethnic-religious groups. In addition, the passage of the Uyghur Forced Labour Prevention Act (UFLPA) in the United States at the end of 2021 was a monumental step in holding corporations accountable for their complicity in the forced labour scheme. In February 2022, the European Commission committed to introducing an EU instrument to ban forced labour products from entering the EU. The Coalition welcomes this proposal, which must be designed effectively to tackle EU companies’ profiteering from Uyghur forced labour, and further calls upon other governments, including the UK, Japan, Australia, New Zealand and elsewhere, to adopt similar legislation to stand against products made with forced labour.

Many inputs and consumer products are at high-risk of being tainted with Uyghur forced labour, including up to 20% of all cotton-based products and up to 97% of all polysilicon-based solar panels worldwide. As the EU is China’s biggest trading partner, European businesses and consumers, in particular, are exposed to Uyghur forced labour. In recent years, an increasing number of parliamentarians in the EU have taken a stand to draw attention to the human rights abuses faced by the Uyghur population. These officials have warned that Europe risks being complicit in forced labour by continuing to allow products produced in the Uyghur Region and in factories across China employing forced labour transfers from the Uyghur Region to enter the EU market.

The following are comments by leaders of Coalition member organisations:

“China’s forced-labour scheme is a central pillar of the government’s atrocity crimes in the Uyghur homeland. It’s time for action to ensure European consumers and companies are not complicit,” said Omer Kanat, Executive Director of the Uyghur Human Rights Project. “Last year, the G7 governments jointly committed to action on state-sponsored forced labour. The next step must be import bans.”

“The European Union must not allow itself to become a safe harbour for forced labour goods once the Uyghur Forced Labor Prevention Act comes into effect in the U.S.A. in June,” said Chloe Cranston, Business and Human Rights Manager at Anti-Slavery International. “Until the EU begins to enforce its own comparable laws, there is a clear risk that companies will simply import Uyghur forced labour products into the EU, instead of the US. The European Commission must make sure its proposal for a forced labour instrument is effectively designed to address systemic state-imposed forced labour like in the Uyghur Region.”

“The writing is on the wall for corporations using forced labour,” said Rushan Abbas, Executive Director of Campaign for Uyghurs. “The arc of human rights among governments such as the US, UK, and EU is bent toward enforcement. Rather than risk disruption to their supply chains, corporations that source their cotton, poly-silicon, tomatoes, or other goods from the Uyghur Region should begin to source from elsewhere.”

“The EU’s mandatory human rights due diligence framework, should set a firm standard that responsible business conduct requires all companies to exit the Uyghur Region completely,” said Allison Gill, Forced Labour Programme Director at Global Labor Justice-International Labor Rights Forum. “It should also make clear that there is no place for goods made with forced labour in the EU market and put in place strong mechanisms to identify and stop these goods from entering . Enforcement of these laws must be swift, robust, and not allow for loopholes.”

“While millions of Uyghurs are being held in unimaginable conditions and forced to work on consumer goods and raw materials, companies that profit off this forced labour – like Hugo Boss and Inditex – are going almost completely unregulated,” said Dolkun Isa, President of the World Uyghur Congress. “They are knowingly making their consumers complicit in genocide, and it’s time they are held accountable. There is simply no way a corporation can claim to be ethical unless they completely extricate their supply chains from East Turkistan – and are willing to provide proof.”

The Coalition to End Forced Labour in the Uyghur Region is a coalition of civil society organisations and trade unions united to end state-sponsored forced labour and other egregious human rights abuses against people from the Uyghur Region in China, known to local people as East Turkistan.