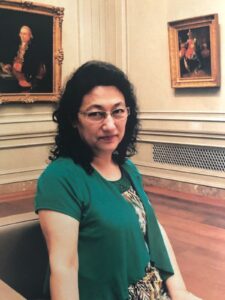 Campaign For Uyghurs Executive Director Rushan Abbas responded to the lies regarding her sister by stating in a video response that “the international community must show the Chinese regime that they will face justice, rather than continuing to be rewarded for their filthy and malign actions. They must be held to account for taking innocent people as political prisoners.”

Campaign For Uyghurs has also shared further evidence of the inconsistencies and lies that characterize the Chinese regime by sharing a previous news piece by Chinese state-run media outlet Global Times, in which it stated that Rushan Abbas, “leader of the so-called Campaign for Uyghurs” and others “first stole some Uyghurs’ photos and information, claimed these people to be “missing” relatives in Xinjiang, spread rumors on overseas media and had interactions with some certain media.” The article was published in December of 2019, while the latest reported information on Dr. Abbas’s case revealed that she was sentenced in March of 2019.

Ambassador Kelley Currie of the United States State Department Office of Global Women’s Issues stated in a social media post responding to the Chinese Foreign Ministry that the reality was that “Dr. Gulshan Abbas was sentenced to 20 years in a March 2019 sham trial because her American family members are telling the truth about CCP gulags in Xinjiang.”

In her taped statement, Rushan Abbas called to task the international community, asking “if a country can imprison family members of foreign citizens, is this really the country you will choose to do business with?”. She continued by addressing leaders in the European Union who “feel comfortable trusting such a regime”, saying “I am holding you responsible for empowering them to commit these genocidal crimes. They are running concentration camps, normalizing slavery, and are punishing my sister for my exercising rights as a foreign citizen. It’s barbaric and brutal beyond words.”

Campaign For Uyghurs calls on all of our allies to take decisive action to call on their elected leaders and politicians globally to address the retaliatory actions taken by the Chinese regime to take unrepentant, brutal action to punish the family members of those exercising their rights to free speech outside of China. Save the life of Dr. Gulshan Abbas, and move to end the torment faced by every Uyghur at the present time.