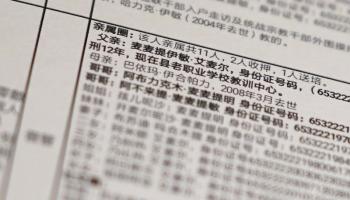 Beijing (AP) — For decades, the Uighur imam was a bedrock of his farming community in China’s far west. On Fridays, he preached Islam as a religion of peace. On Sundays, he treated the sick with free herbal medicine. In the winter, he bought coal for the poor.

But as a Chinese government mass detention campaign engulfed Memtimin Emer’s native Xinjiang region three years ago, the elderly imam was swept up and locked away, along with all three of his sons living in China.

Now, a newly revealed database exposes in extraordinary detail the main reasons for the detentions of Emer, his three sons, and hundreds of others in Karakax County: their religion and their family ties.

READ THE FULL ARTICLE AT AP