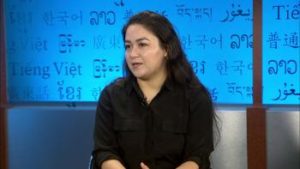 An official list of detainees, leaked to DW and other media, proves how China is tracking every face, every family and every movement of Muslim minority Uighurs in Xinjiang. People have been arrested for innocuous reasons that include growing beards, wearing veils, calling family members abroad, applying for a passport and having “too many” children.

DW’s Esther Felden asked Jewher Ilham about possible consequences of the third big leak from Xinjiang. She is the daughter of imprisoned Uighur academic Ilham Tohti, who was awarded the European Parliament’s Sakharov prize in 2019. Ilham Tohti is an economist who until 2014 lectured at Beijing’s Minzu University of China. He has been imprisoned since his 2014 life sentence on charges related to “separatism.”

Deutsche Welle: How did you feel when you learned about the Karakax List, which proves that China is imprisoning Uighurs based on their faith and culture?