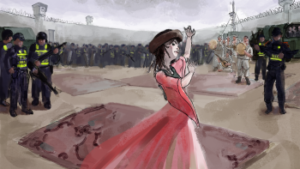 Who are the Uyghurs?

The Uyghurs are a largely Muslim Turkic ethnic group, with their own language and culture. Roughly 11 million are in China, and 1.5 million more live around the world. For centuries, Uyghurs have lived in a vast region of deserts, mountains and lakes in the far northwest of China, known today as Xinjiang. For thousands of years, leaders, tribes and China’s imperial dynasties have fought for control of this resource-rich territory. Around the 10th century, Arab influence arrived in the region and Islam became a part of Uyghur life.

During the Qing dynasty, the region was brought once again under Chinese control. In the late 19th century it was given its current name, Xinjiang, which means “new frontier” in Mandarin.

Today, Xinjiang’s Uyghurs are subject to a comprehensive, targeted campaign of surveillance and control. According to leading researchers and human rights groups, as many as 1.5 million have been placed in concentration camps. This ongoing program of repression follows decades of tension between the Uyghurs and the Chinese government. So, how did we get here?

READ THE FULL ARTICLE AT CODA