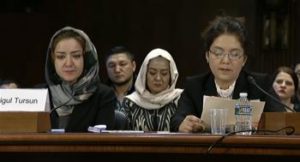 Sitting in a hearing room in Congress, in a gray plaid hijab, her dark blond hair poking out, Mihrigul Tursun begins to cry. She is there to share the plight of her fellow Uighurs in Xinjiang. Her translator reads aloud Tursun’s prepared statement about her three separate detentions by the Chinese government in Xinjiang’s internment camps. As the translator recounts Tursun’s first detention — upon her release, she learned that one of her 4-month-old triplets had died — Tursun struggles to hold back tears. But when the translator recounts the torture — little food, a tiger chair, electric shock treatment and a liquid that stopped her menstrual cycle and likely resulted in her sterilization, which has been confirmed by U.S. doctors — Tursun can’t hold back any longer. She starts to sob.