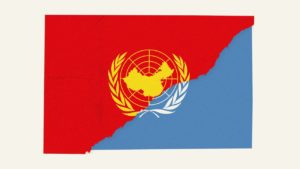 Campaign for Uyghurs somberly acknowledges that today stands as a symbol of fears realized. There is renewed need for further commitment to reveal the depth of the Chinese regime’s snakelike control over international institutions and organizations. China has been given its place on the U.N. Human Rights Council while actively carrying out the genocide of the Uyghurs and normalizing slavery in the modern age, in addition to human rights abuses seemingly too numerous to count.  Perhaps the only positive is that we do see a shift as more and more nation states have recognized the global threat to human conscience that the Chinese regime presents.

We must continue to acknowledge the ways that China’s participation as an equal in the United Nations effectively cripples the UN from fulfilling the purpose for which it was formed. If China has nothing to hide, it should allow the UN to conduct independent inspections in the region unhindered and with unrestricted access. A regime that is undoubtedly unrepentant regarding its human rights abuses stands in stark contrast to others, and it is completely unacceptable that they be able to continue to exploit their position while whistleblowers who have revealed that realities of the UN’s corrupt practices regarding China have been punished.

In response to China’s appointment, Campaign For Uyghurs Executive Director Rushan Abbas stated that “No words can express the feeling of watching the world’s greatest human rights abuser be granted a greater platform to perpetuate its genocidal ideology. The U.N. has made its own reputation the laughingstock of the world, and its corruption has compromised the lives of billions.”

There can be no maintenance of international peace and security without confronting evil. There may be equivalency between people, but there certainly cannot be as concerns political systems that actively deny human rights. Until the UNHRC can recognize this reality, it is rendered completely useless and even harmful to the cause of international peace. True allies of human rights must continue to fight to make the realities of China’s crimes against humanity known to the entire world. May the nations of the world harmonize in pursuit of holding this genocidal regime accountable for normalizing genocide and slavery in the modern age.