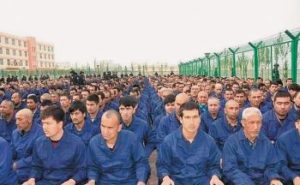 China’s system of extrajudicial internment camps for Uyghurs and other Muslims in the Xinjiang Uyghur Autonomous Region (XUAR) last year may meet the definition of “crimes against humanity,” a U.S. congressional advisory panel said in its annual report, released Wednesday, as lawmakers expressed hope that legislation to hold Beijing accountable for human rights violations will soon become law.

During its 2019 reporting year, covering the period from August 2018 to August 2019, the Congressional-Executive Commission on China (CECC) detailed severe rights abuses in the XUAR’s camp system, where authorities are believed to have held some 1.8 million Uyghurs and other Muslim minorities since April 2017, as well as how China’s increasingly heavy hand in Hong Kong encroaches on that city’s promised autonomy.

Other forms of mistreatment in the camps included restricted access to toilet facilities, punishment for behavior deemed religious, forced labor, overcrowding, deprivation of food, and political indoctrination, the report said, while noting that some detainees reportedly died in the camps due to poor conditions, medical neglect, or other reasons.

“Scholars and rights groups provided a strong argument, based on available evidence, that the ‘crimes against humanity’ framework may apply to the case of mass internment camps in the XUAR,” the report said.

The report said that China’s arbitrary detention of Uyghur, Kazakh, and other ethnic minorities in mass internment camps; the torture of detainees in the camps; the targeting of specific minority groups; and forced disappearances of hundreds of intellectuals meet definitions laid out in Rome Statute of the International Criminal Court, which lists acts that may constitute “crimes against humanity.”

While Beijing initially denied the existence of the camps, China last year changed tack and began describing the facilities as “boarding schools” that provide vocational training for Uyghurs, discourage radicalization, and help protect the country from terrorism.

But reporting by RFA’s Uyghur Service and other media outlets indicate that those in the camps are detained against their will and subjected to political indoctrination, routinely face rough treatment at the hands of their overseers, and endure poor diets and unhygienic conditions in the often overcrowded facilities.

The CECC said that authorities reportedly placed the children of detainees in orphanages and other facilities, despite the willingness of relatives to care for them, “raising concerns of forced assimilation” into majority Han Chinese culture.

The commission also highlighted China’s increasing use of advanced technology and information to control and suppress its citizens, most notably in the XUAR.

“Outside the camps, the Chinese government and [ruling Communist] Party have created a pervasive and high-tech surveillance system in the XUAR that some observers have called an ‘open-air prison’” to form an “Orwellian policing platform” that allows authorities to tighten their control over Uyghurs and other minorities in the region, it said.

In Hong Kong, CECC said it had observed a rollback on freedoms guaranteed under the “one country, two systems” framework as the local government sought to advance changes to the territory’s extradition law to allow the surrender of individuals to mainland China without a vetting process in the legislature.

The extradition bill touched off mass protests beginning in March 2019 that continued throughout the summer, despite a government decision to suspend it, while the demands of demonstrators grew to include a probe into excessive use of force by police, dropping all charges facing those arrested in the protests, and the pursuit of democratic reforms to allow for universal suffrage in Hong Kong’s elections.

“Chinese government influence over the territory, and Hong Kong officials’ willingness to conform to the interests of the Chinese government, continued a trend of decreased autonomy observed over the past several years,” the report said.

“This trend has implications for both the protection of the rights and freedoms of the people of Hong Kong and for the future of U.S. policy towards Hong Kong, which is based on the territory’s continuing autonomy.”

The CECC also noted the deterioration of human rights and rule of law in mainland China in 2019, including the aggressive targeting of unregistered Christian churches, an expanded crackdown on labor advocates and citizen journalists, and a general trend of rising authoritarianism in the country under President Xi Jinping.

The CECC’s report also addressed the situation in Tibet, where it said Beijing cracked down on previously allowed religious practices in 2019 and continued efforts to “Sinicize” Tibetan Buddhism, or bring it under the control of the Chinese Communist Party.

In particular, the government repeatedly insisted during the reporting period that the eventual reincarnation of the Dalai Lama—the exiled spiritual leader of Tibet—must comply with Chinese law, the commission said.

Additionally, the report found, China’s government expanded mass surveillance in Tibet and took actions in the region that severely impacted the environment, including forcing nomads to leave their ancestral grazing lands, where they have maintained the ecosystem through indigenous stewardship.

Among its recommendations to U.S. Congress, the CECC urged lawmakers to call on China to end the mass incarceration of Uyghurs and other Muslim minorities in the XUAR, and release those currently detained, as well as to allow U.S. officials and other international stakeholders to visit the region to independently investigate reports of abuses there.

It called for coordination with other governments and NGOs to compile information regarding XUAR officials responsible for the policies in the region and to support the passage of the Uyghur Human Rights Policy Act, which would allow for sanctions against those officials under the Global Magnitsky Human Rights Accountability Act.

The CECC also called on Congress to enact the Hong Kong Human Rights and Democracy Act to monitor the state of Hong Kong’s autonomy from mainland China, punish human rights violators, and reaffirm U.S. government support for democracy in the territory.

It urged lawmakers to continue to advocate for Hong Kong pro-democracy advocates who are serving prison sentences for their role in peaceful demonstrations as well as to pressure the Chinese and Hong Kong governments to restart the electoral reform process and work towards implementing universal suffrage in Hong Kong’s elections.

Congress should also urge China to stay out of the Dalai Lama’s succession plans and allow unrestricted access to Tibet to investigate reports of abuses there, the CECC said.

Wednesday’s report was released days after U.S. Senator Marco Rubio of Florida, the CECC’s co-chair, urged Congress to pass the Uyghur Human Rights Policy Act which he introduced last year, saying that human rights issues should not be ignored as the U.S. and China move towards signing a deal to defuse ongoing trade tensions, expected next week.

“I will never accept the notion that somehow, in order to be able to sell them more things, we have to look the other way on some of the grotesque human rights violations that we’re seeing systemized on their part,” Rubio, who also sponsored the Hong Kong Human Rights and Democracy Act, told CBS News in an interview on Sunday.

The U.S. House of Representatives and Senate both passed versions of the Uyghur Human Rights Policy Act in late 2019 that must be reconciled before it can be passed through Congress and sent to U.S. President Donald Trump to be signed into law.

Speaking at a press conference on Wednesday in Washington for the CECC report’s release, Rubio and CECC co-chair U.S. Representative Jim McGovern of Massachusetts said they expect a reconciled version of the bill could pass through Congress and be signed into law by Trump.

“We will get to ‘yes’—that is my belief,” McGovern said, adding that such a bill is likely to move forward this year, “hopefully soon.”

McGovern also suggested that the Tibetan Policy and Support Act—which would establish a U.S. policy that the selection of Tibetan religious leaders, including future successors to the Dalai Lama, is a decision to be made by Tibetans free from Chinese government interference—could be taken up by the House of Representatives next week.

The bill, which McGovern and Rubio co-sponsored, unanimously passed the House Foreign Affairs Committee last month, and stipulates that Chinese officials attempting to name a new Dalai Lama will be subject to U.S. sanctions. A Senate version of the legislation has also been introduced by Rubio.

On Wednesday, McGovern said he expects the bill to pass both chambers of Congress because “China needs to know there’ll be a consequence” if it tries to appoint a religious leader like the Dalai Lama that is sanctioned by the Communist Party, but not the people of Tibet.

“[If the Tibetan Policy and Support Act is passed] it will be more than just a press release saying that we object to this,” he said.

“It will be a consequence, and it will be people who will be sanctioned, and that there will be other consequences as well.”