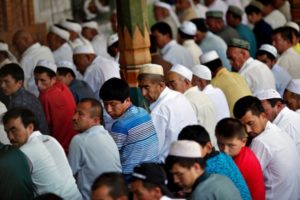 I had a keen interest to know what is going on in Xinjiang with the Muslim community. For this reason, I contacted the Chinese Embassy in Tirana, Albania, in July 2019. I told our Chinese friends that I doubted the story that I was seeing in western media about the Uighurs and China’s treatment of Muslims. I told them that I wanted to prove the Western narrative about Xinjiang to be wrong. Our Chinese colleagues in Tirana liked my profile and invited me, like they have invited other journalists in the past to see the situation in Xinjiang.

From August 16 to August 25, 2019, I visited Xinjiang on the invitation of the State Council Information Office of China and Xinjiang. I was part of a group of journalists who were sent to visit three major cities: Urumqi, Aksu, and Kashgar.

These concentration camps are unknown world for many. Kindly explain what all you saw there and condition of youth.

China is very good in concealing its doings. What we call in the West as concentration camps, China calls ‘Vocational Training Centers’. The Chinese government claims that in these centers, it fights terrorism and de-radicalises extremists.

However, during our visit to these centers, we found that the people whom China calls “students” of the “Vocational Training Centers” were prisoners. They were not terrorists and extremists but Turkic people who were not Han Chinese. Their crime was to be Muslim and Indo-European. The Chinese were forcing them to renounce their Turkic language, culture and Islamic religion. In these centers, they were forced to eat non-halal food, to cheer and give loyalty to Xi Jinping and the Communist Party of China, speak Chinese 24 hours per day and renounce their Islamic culture. Their crime was being a Muslim. We did not find any terrorist, extremist or suicide bomber in these camps.

Are you suggesting these youths are brought in here for brainwashing? To impose ideology by the state?

Yes indeed. I have video recordings which you can see on my YouTube channel where you can see people with Islamic names like Aisha, Summayah, Mahmut etc who have been locked in these mass detention centers only because two years before they had prayed to Allah, made Islamic religious marriage, had put headscarf and consumed halal food. When interviewed by me, these people, who two years before were believers of Allah, now were renouncing their faith and telling to me that they do not believe in Islam anymore, but believe in science and in the Communist Party of China.

They were afraid even to speak their Turkic language but were struggling to learn the language of Beijing. Chinese state propaganda was that Xinjiang had been Buddhist and Islam was imposed by the Turks and the Arabs and China was making sure to turn Xinjiang back to the Buddhist civilization. China is forcefully Sinicizing the people of Xinjiang.

We have seen your videos and they look like as someone surrounded you. It was like a guided tour?

Yes. We were in guided tours. Our Chinese friends wanted us to take pictures of Muslim prisoners who were singing and dancing in Han Chinese and wanted us to tell the world that all was fine in Xinjiang and China was ‘civilising’ its Muslims by making them Chinese. Our Chinese friends did not allow us free movement in cities. Everything was guided and under strict supervision of Communist officials.

You think China is successful in hiding the fact from the world about Uighur Muslims atrocities in China?

Yes. China is very successful in hiding its cultural genocide against the Islamic and Indo-European culture of the Altai Mountains and East Turkestan. It is succeeding in mass assimilation and crushing the Uighur, Turkmen, Kirghiz, Kazakh and Tatar people of Xinjiang and forcefully converting them into the Han Chinese culture.

And why you say this is a systematic attack to eliminate an ethic race from China?

Our visit and filming in Xinjiang proved beyond doubt that China is erasing more than 3,000 years of Turkic, Indian and Islamic civilisation from Xinjiang. It is colonising and destroying the Indo-European demography of Xinjiang by force. China sees Xinjiang and Aksai Chin as important gateways for its imperialist advance towards Asia and Indian subcontinent. It does not want any foreign power to arm and use the Uighurs and turn Xinjiang into a Chinese Afghanistan. It perceives the Turkic and Islamic people of Xinjiang as major threat for its future imperialist expansion. For this reason it is doing a final solution for them: Mass Sinification through colonization, cultural genocide and brainwashing.

OIC is silent and good friend Pakistan is also not coming for the help of Muslims in China. How should the world take this situation?

Pakistan stands between two fires. On one side it faces a powerful India. On the other hand it has to kiss China’s hand since it desperately needs Chinese money and weapons to defend itself from India. If Pakistan was to be on peace terms with India, it would have condemned what China is doing. But as things stand, it cannot say anything.

Regarding OIC – most Arab dictatorships do know what China is doing with its Uighur Muslims but they do not care. During our visit in Xinjiang, we had with us journalists from Saudi Arabia and Emirates who saw how China was imprisoning people only because they were Muslims – but nothing was reported in the Gulf Countries.

Arab dictatorships need China. It supplies them with weapons, high tech and money. China is the best friend of dictators. However, Muslim countries like Turkey, Malaysia, Indonesia etc are speaking up against China. While the OIC speaks about Palestine and Kashmir, it must speak about Xinjiang too.

The reason why many Islamic countries choose to side with the lesser evil – China and accept to ignore the suffering of their East Turkestani Muslim brothers, is related to US imperialism. They see China as the ‘Shaytan’ which we can work with.