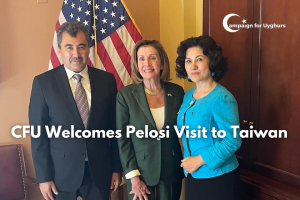 Campaign for Uyghurs (CFU) welcomes Speaker of the House, Nancy Pelosi’s visit to Taiwan. This bold action is in keeping with her long career of holding Beijing to account over human-rights abuses and their predatory economic practices. Ever since the Tiananmen Square Massacre that Pelosi spoke out against, she has refused to kowtow to China.

Pelosi has famously said “If you cannot stand up for human rights in China because of commercial interests, you lose all moral authority to speak out for it in any place,” and she has stuck true to this. In a Washington Post opinion piece released today, Pelosi slammed the Chinese regime’s “brutal crackdown” against “political freedoms and human rights” in Hong Kong as well as Tibet. She continued to say that “Beijing is perpetrating genocide” against Uyghurs in East Turkistan.

This is surely not the first time and certainly won’t be her last where Pelosi has called out China’s Genocide on the Uyghurs on the world stage. She was one of the first to initiate a diplomatic boycott of the 2022 Winter Olympics, held in Beijing, to protest the Uyghur Genocide. She said “For heads of state to go to China in the wake of a genocide that is ongoing while you’re sitting there in your seats really begs the question: What moral authority do you have to speak again about human rights any place in the world if you’re willing to pay your respects to the Chinese government as they commit genocide? So honor your athletes at home.  Let’s have a diplomatic boycott, if in fact, this Olympics takes place.  Silence on this issue is unacceptable. It enables China’s abuses.”

Executive Director Rushan Abbas today said “We had the opportunity to meet with speaker Pelosi just before she commenced her Asia tour and were once again able to discuss China’s war on freedom and the Uyghur Genocide directly with her. Her visit to Taiwan honors her unwavering commitment to defending freedom & democracy. Few leaders have the courage to do what she has done today and we greatly appreciate her bravery, determination and leadership.”

CFU calls on other members of Congress and other statesmen and stateswomen around the world to also take a clear stance against China’s human rights abuses, especially the Uyghur Genocide. They should do this not only for their conscience to save Uyghur people, but also for the sake of the democratic free world. Appeasing China only gives the regime the green light to further expand their destructive ideology internationally while committing genocide domestically.