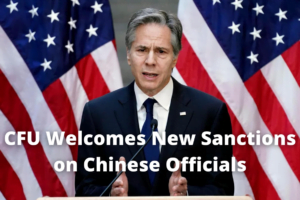 Campaign for Uyghurs supports the Department of State taking tangible actions against Chinese officials for their involvement in suppressive acts against members of the Uyghurs community in the United States. We stand by the Department of State’s call to reject efforts by Chinese officials to harass, intimidate and surveil, members of the Uyghur community, including those who have sought asylum in the US, U.S. citizens, Uyghur activists who advocate for the freedom of their people who have been subjected to arbitrary detention, unimaginable forms of torture and genocide.

Imposing visa restrictions on Chinese officials responsible for, or complicit in, policies or actions aimed at repressing our religious leaders, intellectuals, scholars and Uyghurs in general is a useful tool, along with other sanctions to reprimand China for its ongoing genocide. The United States reaffirmation to support Uyghur rights groups like Campaign for Uyghurs, encourages us further to bravely speak out against the Chinese regime, despite the threat of retaliation to our organization, our members or to our families.

Whilst Campaign for Uyghurs welcomes these sanctions, we would urge that the US Department of State at least consider sanctioning the main culprit in China’s genocide against the Uyghurs, General Secretary of the Chinese Communist Party, Xi Jinping. In an independent Uyghur Tribunal, held in London in 2021, it determined that China, under strict orders, right from the very top, is committing genocide on the Uyghurs.

Executive Director Rushan Abbas said today “As someone who is directly affected by China’s retaliation for my activism, with the Chinese Communist Party taking my sister Dr. Gulshan Abbas hostage, I welcome US Secretary of State Antony Blinken’s call on the Chinese regime to cease its acts of transnational repression, to silence Uyghur Americans and his call to end the Uyghur Genocide & crimes against humanity in East Turkistan.”

We urge other nations to follow in the steps of the US to be committed to defending human rights of Uyghurs and to use all diplomatic and economic measures to promote accountability for China’s genocide of the Uyghurs and other Turkic groups in East Turkistan.