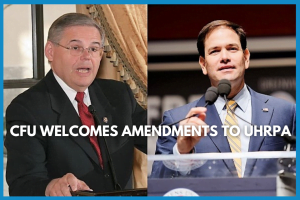 Senators Rubio and Menendez introduced the UHRPA, the first law in the world mandating sanctions to be imposed on entities guilty of violating Uyghur rights. U.S. Senators Rubio and Menendez introduced the Sanctioning Supporters of Slave Labor Act intended to increase sanctions against those who violate human rights against Uyghurs. In addition, those who do business with and support foreign entities sanctioned for human rights abuses against Uyghurs would face secondary sanctions. It’s worth noting that Senator Rubio’s and Congressman Jim McGovern’s Uyghur Forced Labor Prevention Act (UFLPA) consolidated bill creates a presumption that all goods produced in East Turkistan are made with forced labor.

In a press release, Senator Rubio said “The Chinese Communist Party’s abuse of Uyghurs is well-documented in horrific detail. It is not enough to sanction those directly responsible for these crimes — we also need to hold their supporters accountable. Anyone who enables these evil acts should not be benefiting from U.S. financial markets.”

Senator Menendez stated in the same press release “There is no question that the People’s Republic of China has committed a despicable campaign of genocide against the Uyghurs… or that Uyghur forced labor continues to threaten to adulterate global supply chains. The administration must move forward with sanctions designations under the Uyghur Human Rights Policy Act, as well as with the new authorities that this bill provides, and work with our allies and partners to hold China to account for its crimes.”

Executive Director Rushan Abbas today said “The Chinese regime’s genocide of Uyghurs rages on with no end in sight. We must hold those who support these crimes accountable as well as those directly responsible for their crimes. Those who allow these horrific crimes to take place cannot profit from U.S.markets or any market, for that matter. Companies using Uyghur forced labor products on their supply chains turning you and I complicit with China’s genocide! Legislations to stop such practices must be passed swiftly. Similar legislation needs to be passed in other countries to pressure China into changing their genocidal policies.”

CFU urges allies and partners to hold China to account for the regime’s Uyghur genocide. Policy and lawmakers around the world have to muster world-wide support through legislation targeting not just the main architects of the concentration camps but also China’s economy through boycotts, sanctions and divestment strategies. It is urgent to take tangible actions not only for the sake of the people who are facing genocide and modern-slavery but also for the future of the free world. If we allow China to continue its path and enable China’s economy with Western corporations’ business, the world that has been built on the foundations of freedom, democracy, and human rights will be dismantled before our very eyes.