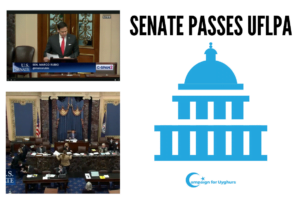 The Senate passage of the newly reconciled version of the Uyghur Forced Labor Prevention Act is welcome news. This comes as a result of the dedication and hard work of Senator Marco Rubio, Congressman James McGovern, and other allies, including Representative Tom Suozzi, Representative Jennifer Wexton, Senator John Cornyn, Senator Jeff Merkley and so many more. Campaign For Uyghurs (CFU) acknowledges the historic significance of this legislation which will combat complicity in the Uyghur Genocide in tangible ways.

CFU Executive Director Rushan Abbas said “We thank those who have been so instrumental in seeing it passed. For American corporations to continue to profit off of the Uyghur genocide is intangible as it conflicts with our values, and those of humanity.”

CFU also wishes to express gratitude to the many Uyghur organizations, individuals, grassroots organizations and dedicated individuals who have worked so hard to ensure that the bill was passed. There is a long road ahead in terms of ending the suffering endured by the Uyghurs and other Turkic peoples suffering genocide under the Chinese regime, but today’s victory offers hope and a reminder of the power of our dedicated efforts.

Additionally, the work of the Coalition to End Uyghur Forced Labour has been instrumental in calling on companies worldwide to do the right thing and ensure that complicity in modern day slavery is addressed. CFU calls on corporations, including those outside of the United States, to accept responsibility and take the steps of true leadership to end these horrors.

Elfidar Iltebir, Secretary of the Uyghur American Association, which advocated heavily for passage of the bill, stated “Humanity won today. By taking this tangible action, the U.S. Congress told the world that slavery/forced labor in any form, in any part of the world, cannot be tolerated.”

As Uyghurs continue to face such oppression, additional legislative efforts should be encouraged. The Uyghur SOS Act introduced by Representatives Suozzi and Hartzler is another piece of valuable legislation which provides further accountability for perpetrators of genocide.