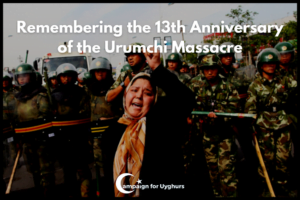 Campaign for Uyghurs (CFU) remembers the July 5th, 2009, Urumchi Massacre on its 13th anniversary. Thirteen years ago today, the Chinese regime turned a peaceful protest into a massacre, with Chinese police shooting at barehanded Uyghur youth on the streets. Thousands more were disappeared and days later, Han Chinese stormed the streets to destroy Uyghur shops, homes and mosques, similar to what Nazis did to Jews during Kristallnacht, “the night of broken glass,” in 1938.

Ten days after the slaying of Uyghur workers falsely accused of sexual assault on June 26th, 2009 at a toy factory in Shaoguan, Uyghurs in Urumchi took to the streets in protest, seeking justice. Police forces turned violent, firing on the protestors and beginning a mass campaign of killings, imprisonment, and disappearances. Chinese propaganda of the massacre said the majority killed were Han Chinese, laying the foundation for further oppression and the current genocide against Uyghurs.

What the Chinese government is doing in East Turkistan is state-sanctioned terrorism. Genocidal policies have detained millions of Uyghurs in concentration camps, and over a million trapped in forced labor schemes. Orwellian surveillance systems monitor every aspect of Uyghur life, from what they do at home to who they talk to on their phone.

Today, millions of Uyghurs are terrorized in their own homes. Torture and indoctrination are commonplace in concentration camps. Women have no bodily autonomy and are subject to systematic mass rape and forcibly sterilized. Uyghurs who leave the camps are often sent to forced labor factories or fields, where they make clothing or pick cotton.

Rushan Abbas, Executive Director of CFU, said, “The world no longer believes China’s whitewashed tales stating the CCP is innocent and a victim in the Urumchi massacre. While we mourn the past, we continue to fight for the living, fight for the future of this free and democratic world. Justice is on our side reclaiming this correct history. We labor ensuring those who perished in 2009 will not have sacrificed their lives in vain. With courage and hard work, justice shall prevail.”

The Urumchi Massacre is a reminder of the brutality of the Chinese regime, and the loss that Uyghurs have endured in the fight for equality. As a world built upon the principles of life, liberty and justice, there can be no bystanders. Genocide is the red line that the Chinese regime has crossed time and time again. We cannot continue to appease China through trade deals or diplomatic ventures as they commit genocide right in front of our very eyes. We need to remind ourselves of the conventions and agreements nations have signed onto and uphold them to the fullest degree if we are to have any moral high ground above despotic dictatorships.