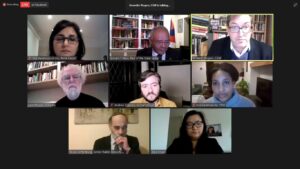 Campaign For Uyghurs (CFU) was deeply moved by the Holocaust memorial event hosted by Rene Cassin and CSW UK, “Together for Uyghurs”. The event opened with remarks from Ziba Murat, who shared about the human side of the genocide and stated “I am here, not as a professional activist or scholar, but as a daughter, and as someone directly affected by the atrocities that are being discussed today against the Uyghurs, as part of this week to remember one of the worst stains on human history: the Holocaust. I am one of those who understands deeply how this horror must inform our response to present events.”

Her remarks were followed by a statement of solidarity from Rabbi Wittenberg, who stated that her remark “On behalf of the Jewish people, in the best way that we can, you are not alone.” He stated that what is happening to the Uyghurs is “Deeply familiar, far too familiar from Jewish history.” and that  “It would be a breach of the meaning of the history that we’re not prepared to act.” Sonam T. Frasi, Representative of His Holiness the Dalai Lama for Northern Europe, Poland, and the Baltic States, said encouraged the Uyghur community to “never give up” and that “no matter how strong the wind of evil may blow, the flame of truth will never be extinguished.”

The strong statements of solidarity from different religious beliefs were very powerful, each giving their reasons for speaking out. Archbishop Angaelos, the Coptic Orthodox Archbishop of London stated that “I speak out for the Uyghur people because the Christian message is founded on the understanding of the sacredness and the sanctity and dignity of every life as we are all created in the image and likeness of God.” Andrew Copson of Humanists UK spoke of the choice to speak out because “As a humanist, I believe that governments exist to protect our human freedom, dignity, and our choice” and confirming that the Chinese regime’s actions were in contradiction of this mandate. Imam Qari Asim, MBE, said that “Islam inspires me to stand firm for justice, and rescue those people who are being oppressed and persecuted.”

Lord Rowan Williams reminded attendees that they were “seeking to advocate not just for one profoundly suffering and abused community, but for the security and well-being of all who bear the divine image and the divine gift.”

On behalf of all those fighting for the human rights and democratic freedoms of Uyghurs and other Turkic peoples facing genocide by the Chinese regime, we sincerely thank the organizers for holding this event and thank you to all those people of various faiths who choose to stand with humanity. CFU hopes to see more communities joining in defense of Uyghurs, and in defense of the future of mankind.