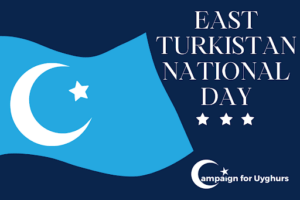 Today marks a day of celebration, as well as remembrance, for the Uyghur people. On this day Campaign for Uyghurs (CFU) recognizes the formation of the Republics of East Turkistan, and what this means to a population now facing genocide in East Turkistan.

Following decades of oppression and brutalities, a fully realized genocide is now ongoing in East Turkistan. This occasion reminds the Uyghurs there to hold on to hope in the midst of attempted extermination. It is exceedingly important to remember the colonial invasion of this land with the establishment of the People’s Republic of China. In its wake the ultra-nationalistic Chinese regime is presently conducting genocide against Uyghurs, waging a war on Uyghur history, religion, and ethnic identity.

Executive Director Rushan Abbas remarked in honor of the occasion that “It is the right of every person to have a free and democratic voice with which they may express themselves. Today we reflect on the importance of democracy as a bulwark against genocide and human rights abuses. Without these integral defenses, no people can hope to establish a free and equitable society. In a land that once birthed democratic freedom, there are now concentration camps, modern-day slavery, and genocidal terror.”

This commemoration is critical for a community that is geographically dispersed but spiritually tethered. Until the rights and dignity of the Uyghur people are respected, until this genocide is ended, until freedom is established in East Turkistan, Campaign for Uyghurs continues to work hard to advocate for the rights of the people of East Turkistan and sends each and every Uyghur across the world greetings in solidarity on this special day.