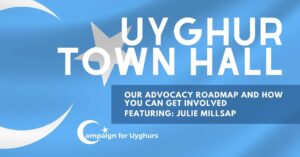 On May 12th, the Harris County Commissioner’s Court in Texas took the extraordinary step of declaring the actions of the CCP in East Turkistan as a genocide. Campaign For Uyghurs (CFU) applauds this measure as a serious and material method of building support in local communities for Uyghurs in East Turkistan as well as the diaspora around the world. With a grassroots movement of solidarity, we are able to increase the visibility of the genocide while engaging communities across the United States, and the world.

The passage of local resolutions condemning the genocide against Uyghurs serves as an excellent way to bridge cultural gaps, and can be pursued by activists at any level of government. For every person and community that gets involved, it becomes more difficult for the Chinese regime to keep their genocidal actions a secret. More than a showing of solidarity, Houston’s declaration is a rallying cry for citizens everywhere of every nation to stand up on whatever stage is available to them to demand justice on behalf of a people they may never have met, but who deserve their support nonetheless.

Rushan Abbas, Executive Director of Campaign for Uyghurs, declared “Right now, millions of Uyghurs are suffering from a regime’s active genocidal policies that view them as a ‘tumor’ to be eradicated. Yet, as far away as Texas, people are demanding freedom and dignity for Uyghurs everywhere. It is encouraging to see such action at the local level. We all have a voice and role to play, and whether it is a city, state, or federal government, these platforms must be used. I offer my sincere thanks to the Minaret Foundation and Harris County for their support.”

Campaign For Uyghurs eagerly anticipates further action on the local and State levels, and would like to express the deepest appreciation to The Minaret Foundation for the example they have set with this initiative.

To make a donation to continue the vital work for the Uyghur cause, please click here.