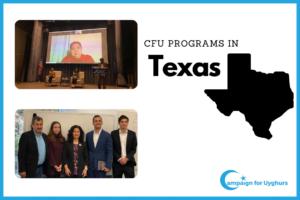 This week the Campaign For Uyghurs (CFU) team traveled to Houston and San Antonio, Texas to participate in a series of events educating the public on the Uyghur genocide. CFU Executive Director Rushan Abbas spoke at Rice University, the Houston Holocaust Museum, and attended a screening of “In Search of My Sister” in San Antonio. She highlighted her sister’s story as her connection to the ongoing genocidal policies in East Turkistan, as well as the issues facing Uyghurs abroad in the diaspora.

At an event hosted by the Rice University Young Democrats and Dr. Craig Considine, Ms. Abbas answered questions on the genocide and offered commentary on how the war against the Uyghurs has developed. Following her program, the participants remarked that “…China’s new forms of colonization and a reason why so many people are willing to look away is due to China’s new national identity and culture based around economic growth and expansion after the mass destruction of old texts and art in the Cultural Revolution. Your talk helped bring into focus just how many natural resources and critical transportation points East Turkistan has, and I would be interested in discussing this further.”

At the Houston Holocaust Museum Ms. Abbas reminded the audience that “while the world frames the genocide as a political issue, the Chinese regime is being rewarded for its crimes. Beijing is hosting the 2022 Olympics. How can we have such a literal repeat of historic mistakes? Beyond just the crisis of the Uyghurs, the future of democracy and freedom in the world are at stake.” Zumret Dawut joined the event online and offered her testimony as a survivor of the camps in East Turkistan. Her moving and emotional story afforded those present a first-hand account of the genocide.

The Holocaust Memorial Museum San Antonio hosted a screening of the documentary “In Search of My Sister”, which follows Ms. Abbas’ in her campaign to free her sister and millions of Uyghurs from detention under the CCP. Following the screening, Ms. Abbas, and director Jawad Mir were on a panel to speak on the ongoing genocidal policies of the CCP. CFU was honored by the strong engagement and positive reaction from the Texas audience during this event. 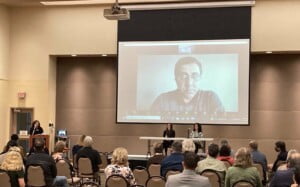 CFU is grateful to the organizers at the Holocaust Memorial Museum of San Antonio, the Jewish Community Relations Council, the Departments of the Jewish Federation of San Antonio for hosting this important event. Additionally, the team wishes to express deep gratitude to  Representative Joaquin Castro for speaking at the event and  Dr. Sean Viña for moderating the panel discussion. Finally, CFU thanks The Chinese American Citizens Alliance, SOL Center, the Cooperative Baptist Fellowship of Texas, and the World Affairs Council of San Antonio for serving as partners in this screening. CFU is also appreciative of the Uyghur community in Houston for joining the session in San Antonio.

Following these events, CFU had the opportunity to engage with community members and the team looks forward to continuing to work with groups in Texas. Following September’s presentation to the Houston World Affairs Council, CFU continues to recognize business leaders and civic society groups in Texas as key potential allies in exposing the CCP’s crimes against humanity. Now is the critical and fleeting moment for the world to respond to this genocide and demand an end to these atrocities. As this visit made clear, our fight does not end at the borders of East Turkistan; it reaches across the world and threatens the entire democratic order.