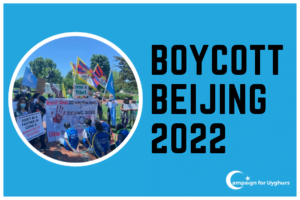 Campaign For Uyghurs (CFU) condemns the arrest and subsequent treatment of activists in Greece during the lighting of the Olympic torch. The actions taken by Greek authorities on behalf of the Chinese communist regime have been nothing short of alarming. As Uyghurs at home face a continuing genocide, it is becoming apparent that some governments are choosing to follow the wishes of the Chinese authorities over their commitments to universal human rights. Following a protest against the upcoming 2022 Olympics, set to be held in Beijing against a background of murderous brutal repression, Joey Siu and Tsela Zoksang were detained for over 24 hours. During their detainment, they were questioned by Greek police. Politico has reported that they were told protests like these could damage the relationship between Greece and China. These sort of politicized interrogations and detainments are precisely what is being resisted across these oppressed communities, and to see it spread globally should alarm every defender of our international order. It is yet another example of the power of the CCP being used to leverage their policies abroad in a bid to ensure that no corner of the globe is safe for those who resist their control.

Pema Doma of Students for a Free Tibet, remarked that “Tibetans are right now facing unprecedented campaigns of repression, making Tibet the least free place in the world alongside Syria. The camps imprisoning millions of Uyghurs continue to flourish, and pro-democracy activists in Hong Kong remain behind bars. If the IOC wants the Olympics to be a triumphant symbol of global unity, then it must prioritize basic human rights. It’s that simple.”

Zumretay Arkin of the World Uyghur Congress offered that “We’re less than 4 months away from the Beijing 2022. For over 2 years, we have urged the IOC, broadcasters, athletes, governments, sponsors to boycott the Genocide Games, but it is now up to the international community to take a stand in the face of an ongoing genocide. This is our collective responsibility. As a Uyghur activist with detained relatives in camps, I ask you to choose humanity.”

The 2022 Beijing Olympics represent a moment in which international pressure should be applied to an international event. Activists should be praised for risking their personal well-being to call attention to the oppression their people are facing, not met with proxies of the Chinese state in otherwise democratic countries. A boycott of this event is not only a show of support, but a necessary commitment. It is the responsibility of the international community to put an end to the far-reaching power of the CCP’s influence, rather than answering to it as global freedom and democracy is at stake.

Executive Director of Campaign for Uyghurs Rushan Abbas said “These activists have taken a proud stance against genocide and injustice, not just on behalf of the Uyghur people, but on behalf of the entire global community. The world has an opportunity here to stand on the side of freedom, democracy, and dignity. Instead, many countries are choosing to once again defend a genocide. The time for action is now, the moment for decisions has come, and every government must choose their place in the fight to end this current Uyghur genocide and hold the CCP accountable.”

To join the fight to boycott the Beijing 2022 Olympics, visit the Berlin-Beijing Olympics campaign and take action.