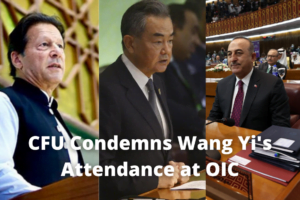 Campaign for Uyghurs (CFU) condemns the Chinese foreign minister Wang Yi’s attendance at a meeting of the Organization of Islamic Countries (OIC). The OIC’s statement rightfully mentioned the plight of those in Afghanistan, Jammu and Kashmir, Yemen, Syria, Somalia, Palestine, and the Rohingya community, but failed to acknowledge the ongoing Uyghur genocide.

This year the meeting was held in Islamabad. It was appalling to see that Pakistan invited Wang Yi as a ‘guest of honor’, while Uyghur Muslims do not have the right to identify as Muslims or practice Islam. While the Pakistani government has been a leading voice against global Islamophobia, to this day it has not called attention to China’s genocide against the Uyghurs. Prime Minister Imran Khan has been silent on the Uyghurs, saying “our relationship with China is such that we have an understanding that between us, we will talk to each other, but behind closed doors, because that’s the nature of the culture.”

Executive Director Rushan Abbas today said “It is a slap in the face to Muslims that Wang Yi and his regime are waging war on Islam. The OIC is facing a crisis of authenticity. For an organisation that claims to speak for the Muslim world, it is hard to imagine a more direct betrayal. Muslim leaders must defend their faith by speaking out against injustice, oppression and tyranny, as is the tradition of the Prophet Muhammad, peace be upon him.”

We are grateful to the Turkish Foreign Minister, Mevlut Cavusoglu, for mentioning the plight of the Uyghurs and reminding the OIC of its duty and responsibility to the Muslim world. During his address at the conference yesterday, he said “In China, Uyghurs and other Muslims, have difficulties protecting their religious rights and cultural identity, we should first hold ourselves to account. Is it right to ignore the situation of the Uyghurs? We do not want Muslim countries to have problems with these countries, on the contrary, we want our good relations with those countries to improve the situation of Muslims. We know we are here on one mission with the OIC, the OIC only exists because we have the same mission, its duty is to be the collective voice for the Muslim world.”

We echo the call that Mevlut Cavusoglu has made and call upon the OIC, its members and the broad Muslim collective to hold China accountable for its genocide and crimes against humanity.

Muslims living in the West can get involved in the “Stand 4 Uyghurs” protests; “Stand 4 Uyghurs” is a movement which mobilizes Muslims towards knowledge and effective action for the Uyghur cause. You can learn more about getting involved at stand4uyghurs.com.