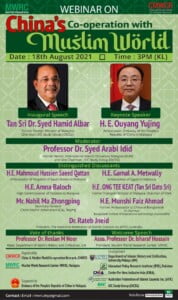 The Chinese Embassy in Malaysia is organizing a webinar on August 18th entitled “China’s Cooperation with Muslim World”. Tan Sri Dr. Syed Hamid Albar, former Foreign Minister of Malaysia, and the Chinese Ambassador to Malaysia will speak alongside several academics, leaders of the Islamic communities, as well as other ambassadors and officials from other countries, including prominent scholars such as Dr. Syed Sayabi Idid and Dr. Ratib Jneid.

Campaign For Uyghurs (CFU) is appalled to see the Chinese Communist Party (CCP) once again lending legitimacy to their war on faith by preying on the lack of awareness regarding the details of the CCP’s war on Islam and the Uyghur genocide in the Muslim world.

While carrying out the genocide of the Uyghur people, outlawing Islam, and banning standard Islamic practices under the guise of “Islamic extremism”, the CCP is simultaneously forming alliances with the Taliban in Afghanistan. They are, at this moment, attempting to win over Islamic scholars with the pretext of alliance and friendship. This is the same regime that has overseen mass rape of Uyghur Muslim women, conducted forced sterilization, forced abortions, and forced IUD insertion. While Uyghur Muslim women’s bodies have become a battleground of this genocide, the CCP publicly tweets insults to dehumanize them, on one occasion saying Uyghur women were “no-longer baby making machines” on the Chinese Embassy’s official Twitter account.

This is the same regime that forced Uyghur Muslim women into marriages with Chinese men, coercing them with the threat of imprisonment for being “radical Muslims” if they refused. This is the same CCP that announced on their state media publicly to the world that they will rewrite the Qur’an to make it compatible with the CCP’s atheist communist ideologies, and have not only seized and burned the Qur’an, but all Islamic items such as prayer rugs. The CCP has sent millions of Uyghur Muslims to concentration camps and millions more to be used in forced labor schemes. They are waging a clear war on Islam and spreading disinformation and propaganda, such as this scheduled conference.

It is clear from these hypocritical actions that the regime is not only fearful of losing its financial hold in Muslim countries, but also seeks to brainwash Muslim communities around the world with disinformation while it feels no need to prop up its lies regarding the reasons for its genocidal crimes. This event a slap in the face to Malaysians, who are having their own future and sovereignty of their nation compromised by the dangers that China’s neo-colonialism poses to the Muslim world.

Speaking on this atrocity, CFU Executive Director Rushan Abbas remarked that “I am dismayed by yet another example of China’s attempts to insult the intelligence of our Muslim scholars while eradicating Islam from our homeland and waging war on our faith. The Chinese regime is spending millions on propaganda to hide the truth from the Muslim world. Their cooperation with China could mean their destruction and loss of sovereignty in the end. Our Muslim brothers and sister’s silence will undermine what we value in our faith, in our holy Qur’an!”

CFU calls on the Muslim Ummah around the world to vocally denounce the defense of such atrocities and speak the truth on CCP’s crimes against humanity when they participate in these propagandist events. For the future of Islam, the Muslim world, and humanity, the Chinese Communist Party must be prevented from spreading its disinformation and defending its crimes across the globe.

To read more on the dangers of Chinese neo-colonialism to the Muslim World, see “Menace: China’s Colonization of the Islamic World and Uyghur Genocide”.