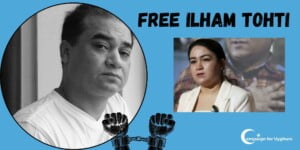 Campaign For Uyghurs (CFU) condemns the Chinese regime’s belligerent denial of access to a European delegation due to their request to see imprisoned Professor Ilham Tohti. Xu Guixiang, a CCP spokesperson, stated that “this is disrespect of China’s sovereignty” referring to Professor Tohti and others as “criminals”. In reality, Dr. Tohti’s abduction by the Chinese regime was an early indication of the CCP’s genocidal intent.

CFU Executive Director Rushan Abbas stated upon hearing this news “Professor Ilham Tohti’s preposterous arrest and sentencing should be enough to classify the CCP as a criminal regime.” She continued that “If falsely accused individuals like Ilham Tohti, Yalqun Rozi, Dr. Rahile Dawut and hundreds of innocent people like my own sister, Dr. Gulshan Abbas, who was taken by the Chinese regime in retaliation for my advocacy work, if these are not enough of a reason to decouple from the regime, why not the presence of millions in concentration camps, an undeniable reality. As a U.S. citizen, a right to exercise free speech should be defended, and especially from a regime that is committing genocide of the Uyghur people while taking advantages of our platforms and institutions in the West to spread lies and buy silence. A State actor that would sentence the family members of foreign citizens to prison in retaliatory action via sham trial and with false charges, should be referred to as a rogue state.  It certainly should not be rewarded by the IOC for its genocidal crimes by hosting the Olympic games next year.”

CFU applauds those European leaders and European Parliament for their attention to Ilham Tohti’s case, and hopes that the aggressive, criminal manipulations and lack of transparency by the Chinese regime, as well as realities of the ongoing Uyghur genocide, will spur greater action in Europe.

Our response as global citizens must protect human rights at all costs. This strong stance in defense of human dignity is not just about addressing an atrocity against the Uyghurs, it is also about confronting an enormous, imminent threat to the entire international community. This fight is between good and evil, and between freedom and oppression. Democracies are balancing at the edge of a precipice, with a final chance and choice to make. We must act now to stop the Chinese regime, and to demand freedom for Dr. Tohti and millions of others, and an end to the genocide.