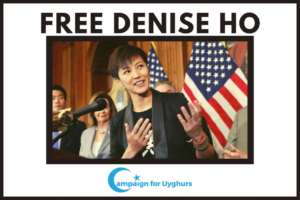 It is with outrage that Campaign for Uyghurs (CFU) condemns the arrest of pro-democracy activist, award-winning Cantopop star, and Canadian citizen Denise Ho in Hong Kong. Arrested under the crime of “Conspiracy to Commit Seditious Crimes”, Ho and five others face a colonial-era accusation by the Chinese government. These arrests come in response to the organization StandNews, of which Ho was a board member. The Chinese Communist Party (CCP) has initiated brutal anti-democracy crackdowns in Hong Kong following the 2014 Umbrella Movement that saw mass street protests led predominantly by young people. These arrests follow a larger pattern of retaliation designed to crush dissent in territories that China considers integral to its growing strategy of global power, much as the Uyghur genocide in East Turkistan does.

Joey Siu, Policy advisor at Hong Kong Watch said “The arrests of Stand News journalists, including former directors Margaret Ng and Denise Ho is yet another shameful full-on assault on Hong Kong’s press freedom.  When journalists are accused of sedition for reporting the truth, and foreign citizens like Denise arbitrarily detained by the government for advocating for human rights, it is a clear sign that Hong Kong is no longer the city that upholds freedom and democracy. The international society, especially Canada, has to fulfill our responsibilities and take concrete actions immediately to hold the CCP accountable and press for the release of Denise and others.”

During the groundswell of support for Hong Kong’s democratic rights, Ms. Ho testified before Congress and the United Nations, using her status as an international pop star to bring attention to the plight of those living in the city. However, following the protests, the CCP passed security laws aimed at curtailing popular resistance to their rule. These laws have seen freedom of the press and speech severely undermined, and risk returning Hong Kong to the status of a colony.

Executive Director Rushan Abbas said “I was incredibly troubled to hear of Denise Ho and other activists being arrested this morning. It is even more troubling knowing that Denise’s status as a Canadian citizen did not serve as an adequate deterrent for the CCP. This proves once again what we have long known, that no one is safe in criticizing the CCP on behalf of their people. My heart goes out to all victims, especially Ms. Ho, those arrested today, and their families. We have seen far too many friends and allies fall victim to these abuses, it should be clear now that a change is long overdue.”

The international community must unequivocally condemn actions like those undertaken this morning as authoritarian, especially when those targeted are the very ones who have risked their safety to provide evidence and testimony to governmental bodies. Campaign for Uyghurs is proud to support the movement for Hong Kong democracy as a central tenet of resistance to the CCP and offers their continued support to Ms. Ho and all who face persecution at the hands of this regime. Organizations like Hong Kong Watch continue to operate on the issue of democracy and human rights and are critical to maintaining a global spotlight on these continued crimes.