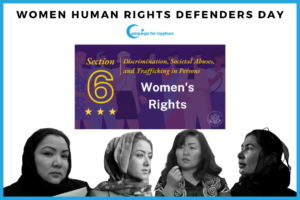 Throughout the history of the developed world, there have been individuals who have stood in the defense of Women as they faced adversity and discrimination in their day-to-day lives. Right now, millions of women in East Turkistan are facing specific threats as part of the ongoing Uyghur Genocide. Today, we recognize and celebrate those who have come to their defense, and the defense of women around the world.

From the suffragette movement in the United States to the defense of women’s educational rights in the Middle East, the equal treatment of women has been a critical component of democratic governance. Yet, in Chinese-controlled East Turkistan, women are each day facing forced sterilization, sexual abuse, and internment. This treatment constitutes a human rights atrocity, regardless of who it happens to. It is the specific role of women as the bearers of a new generation however, that has made them such a threat to the Chinese government’s control of the region. As a result, a war on birth rates has targeted women across East Turkistan, leading to the largest decline in UN record-keeping.

Even in the face of such threats, Uyghur women around the world have taken up the mantle of their people; organizing protests, becoming activists in their host countries, and speaking out in defense of the Uyghurs. Individuals like Zumret Dawut, Gulbahar Haitiwaji, Tursunay Ziyaduwudun, and Mihrigul Tursun represent only a small fraction of the women who have risen to the occasion to defend their people.

Executive Director of Campaign for Uyghurs Rushan Abbas said “If one can ever search for goodness in the face of such despair as this genocide, it can be found in the faces of Uyghur women and girls around the world. Wherever they are, they are speaking out as defenders of their people, carrying on a strong tradition of activism that has its roots in their mothers and grandmothers before them. This moment needs strong leaders, and on this day we recognize those women who have risen to that occasion.”

Campaign for Uyghurs is proud to conduct workshops around the world with a focus on educating Uyghur women and youth on how they can take an active role in ending this genocide. It is a testament to their resolve and determination to see them gather in order to learn these skills. Now is not the time to rest on the laurels of past achievements. We must look instead to previous defenders of women’s rights as models on which we can base our activism today. The inheritance left to this generation by the previous is a longing for justice, and the strength to achieve it. East Turkistan, as well as everywhere else oppression exists, must be the battlegrounds for change.